Appearance: Android C is a rather short, as he stands at a mere Five Feet and Two Inches tall. He has the physical appearance of a humanoid version of a metallic bat zoanthrope, but stripped down to the bare bone skeleton beneath the head. Even paired with a set of metallic wings which come down from his shoulders and cover his arms, Android C has the appearance of always wearing a cape. His body, once the rust was removed from his body, it was revealed that his body was mostly covered in violet and various shades of gray. There are slightly gold accents around his neck and his ear, with red coating the interior of his wings. But what is most striking is that, once you look him in his orbital receptors, his eyes are pure shades of crimson. The body of this Android has a special quirk to it, as all of his joints are connected onto his body through a special magnetic field, and each limb is able to sustain its own energy for a short period of time. The magnetic joints of his allow him to separate his body and reattach them with no effort or consequence of his own accord. 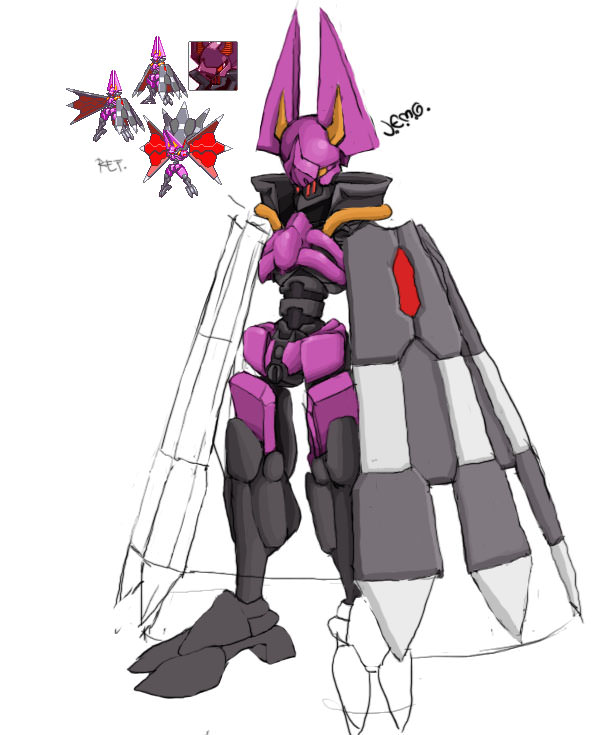 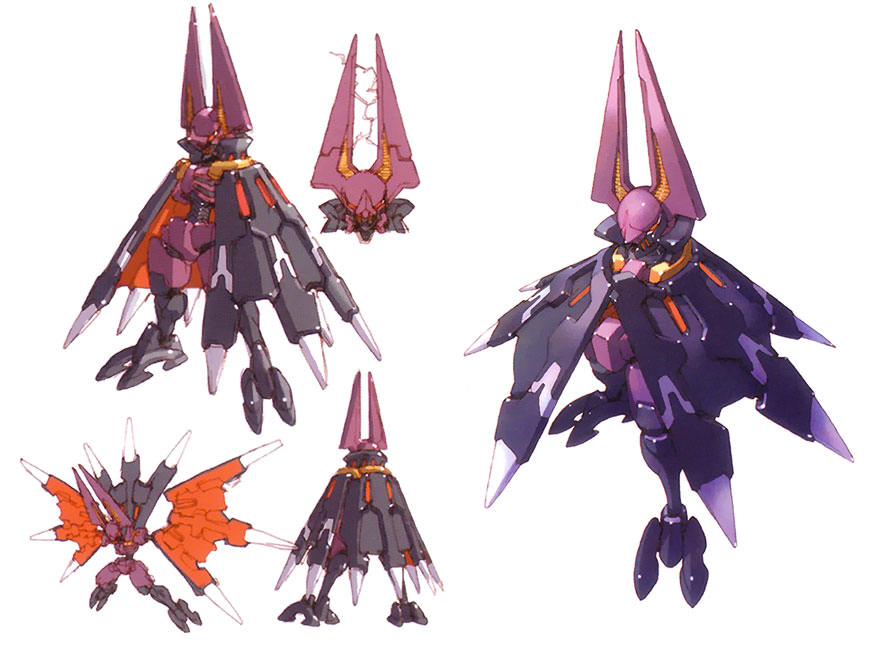 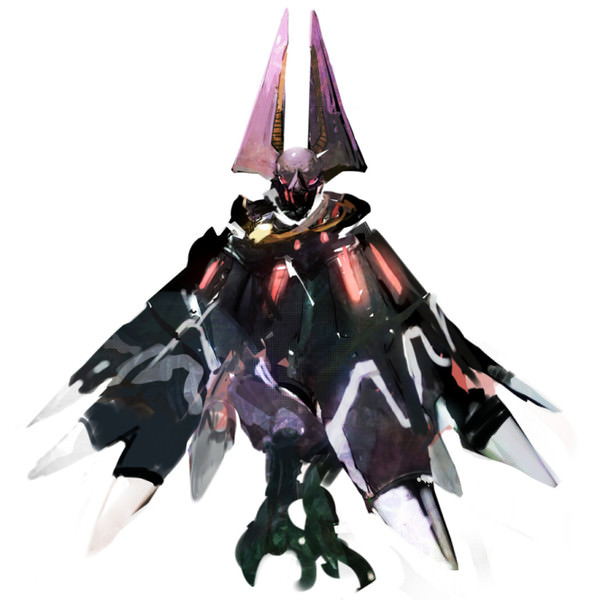 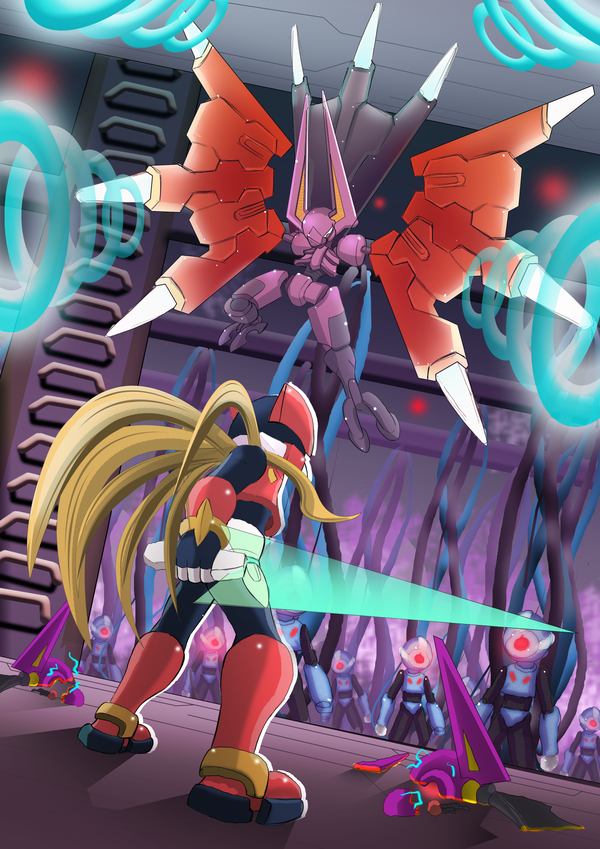 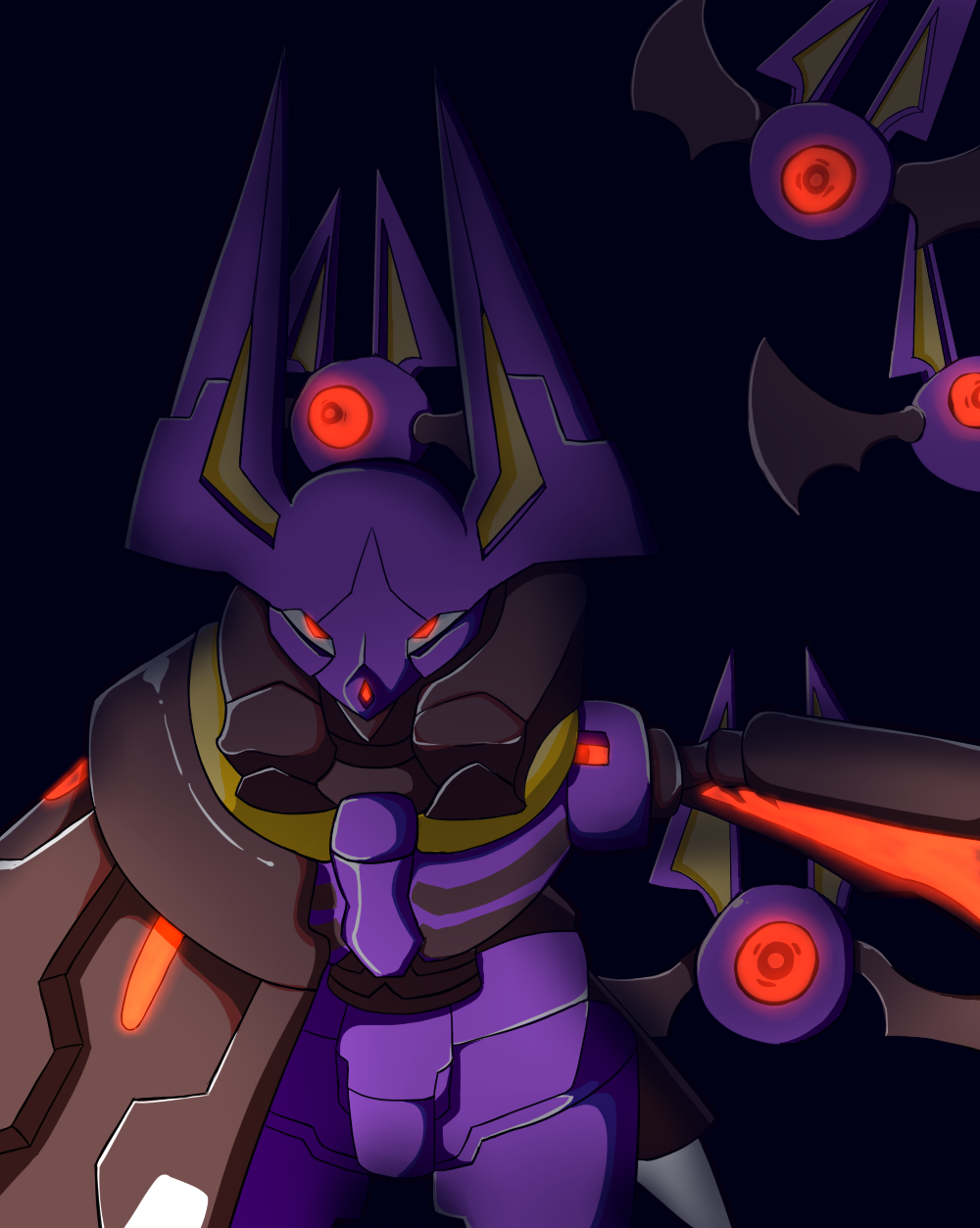 Background: Over a century ago, there was a race full of Pseudo-Hakaijin, a particular sect in which there was a slight mutation. The mutations in question varied from one to another, making them adopt aspects of different animals. Some shared the features of dogs, others bats, snakes, birds, mice. You name it, there was a good chance there was a sub-race of Hakaijin among them. They were very small, as they populated what could only be considered a dwarf planet, and only consists a small portion of their overall race. But, despite their small sizes in number, the small settlement occupying a planet in the middle of nowhere were full of scientists proficient in the art of building rather sophisticated androids. It was all they could do, since their bodies were too weak to actually perform actual combat themselves. Twenty six in total, as that was the amount they could only support with their small size, but these twenty six were adept in their function.

That function? Combat. Pure, raw combat. Because of the limited amount of resources the dwarf planet was able to provide, the ones in charge of the settlement had to gain them in riskier fashions. Creating these androids, they were able to start up their own little private military company, called ‘The Letters of War.’ Although weak at first, the Batkaijin were able to program these androids with a strong enough AI in order to adapt to any kind of combat they found themselves in. Slowly, but surely, these androids grew stronger and stronger, adopting the strength of those they have fought, and once they deemed the opposing forces having nothing left to ‘Teach’ them, they mercilessly execute them. This process continued, escalating in such a fashion that they became among the most sought after Private Military Company.

But success begets envious interlopers who wish to change the game.

Other lesser PMC’s came up with a rather underhanded tactic, as they tracked one of the androids back to their homeworld. Expecting a fortress, they find themselves gazing upon one of the smallest planets in the galaxy, with only one settlement occupying the planet. And these lesser PMC’s decided that in order to bring home the most delicious food and monies, they would have to crack a couple eggs. So, in a concentrated effort, they all struck at the weakpoints of this dwarf planet, starting the death clock of this planet.

In one final push, these sub-race Hakaijin tried to flee, only to be intercepted by their competition, and before they had the chance to activate their androids in order to stand a chance……… They shot a blast at the fleeing ship, landing a critical hit and destroying the life support systems in the blink of an eye. Life almost immediately left the ship in mere moments, leaving deactivated androids to linger in the storage pod bays. Confirming the death of those on the ships, the competitors flew away, letting the destruction of this dwarf planet engulf the ship, and sending the innards destroyed and flying away through the voids of space.

One particular android drifted towards the planet of Vegeta, this android was based off of the Chiroptera Sub-race of Hakaijin. Or, for short, held the appearances of a robotic bat. It crash landed right into the middles of some old, ruined settlement of the planet, long forgotten for nearly half a century. That was until a saiyan altercation unearthed the ruins to be explored once more, finding the remains of a rusting android. Though it was discovered, those who found it saw it more as a war trophy rather than a possible robot that can aid them in whatever life struggles they may endure. Bringing it back to their homes, they mounted and posed the bat in a menacing fashion, claiming the defeat of this robotic creature was proof of their own strength.

Fastforward to present day, where the World Trade Federation drove the saiyans off of Planet Vegeta, their troops were exploring homes to see what valuables they could plunder. Finding a decrepit android full of rust, they saw an ample opportunity to see if they can make a quick buck by salvaging the parts of this thing. Picking up this android which remained still in an emergency shut down function, the plunderers carried this bot’s body into the storage of one of their ships. Gathering their copay for what they found, the workers left this robot in the storage of the WTF. Leaving it to be found by whomever found interest in such a rusted thing… Soon, as whomever of sizeable power level found his body, the emergency shutdown would be released, as the emergency reaction function would finally find reason to activate for the first time in centuries.

Soon, Android C would find consciousness, though with corrupted files beyond belief. There would be no memories of centuries forgone, as those files were well beyond corrupted. What only remained was his identification, strands and codes of forlorn memories that would not make sense in any context, and only one directive that remained, as it was integral to his program.

“Learn, Adapt, and Evolve.” And that was what he was going to do, once he was reawakened once again.


Demonbat Squall [N1] – Building up the energy within his throat, Android C prepares a dangerous attack. At peak pressure, C releases an explosive blast of energy from his mouth, aiming to obliterate anything standing in the immediate blast of his mouth scream beam. (33%)

Hellbat Squall [UP2] - Building up the energy within his throat, Android C prepares a dangerous attack. At peak pressure, C releases an explosive, body-sized energy blast from his own mouth, aiming to eradicate anything within his own path. (66%)


Disperse [SU1] – Finding himself facing a rather dangerous obstacle, Android C finds it best to avoid this attack by quite literally separating his body into multiple pieces. Surging his own internal magnetic systems, every joint of his is rocketed off of his body, all of them avoiding the attack, and his limbs scatter among the ground. Android C, if in a pickle, can maintain this farce of having fallen apart to pieces, but eventually has to pull his body back together in order to not risk losing energy for the rest of his body. (100%)

Move on to your Beginner's Presentation when ready.