Glimpse of what is possible (completed)

(I would colour the talking but I kept getting error that delete big chuck of work because of it. So I'm sorry for the no colour.)

It was two days before Garic would leave Konats. While Garic was gathering all the necessary items required for his journey to earth he would find a letter on his bed. Garic would read the letter with it detailing a message from his master Arthur requesting to see him at their old training area. Where Arthur would train Garic into the man, he was now with Garic developing a fear of training with his master as he can still remember how tough he would be on him. ‘Oh god, I hope he doesn't want to do one last training session before I leave.’Garic would think a feeling bit of dread as he has flashbacks of that time his Master had slashed Garic on the back with him saying something like. “You should have been quicker than that if you don’t want to die in this universe.” He had said in jokingly manner thinking it was some sort of life lesson that he had taught Garic with Garic remember how painful it was with it also being the first time he had seen his master fight seriously for once. Garic mind would snap back into reality as he hears knocking on the cabin door ‘Who could that be, knocking on the door’ Garic would think curiously. Garic would open the door and see no one there bit confused on who had knocked on the door he would step outside to see if anyone might have been playing a prank on him but probably not as he does live in the woods. If anyone saw his cabin, they probably think it was abandoned house. It probably why Arthur had chosen the cabin as Garic living space so he wouldn’t be disturbed by townsfolk. After a look around for three mins, Garic couldn't find anything to indicated anyone was here. As Garic made his way to the cabin door, he would notice a dagger stab into the door with a note attached to it.’How did I miss this on the door...anyway what does this note say.’ Garic would read the note with it being from his master telling him to hurry up already and make his way to the training area.

Curious about why his master wants him to meet him at their training area.Garic powers up as he emits bright yellow aura and flies to the training area with him landing a clear grassy field with Master sat there in meditating position with his eyes closed.

“Your late Garic. I have been waiting here for 6 hours.”Arthur said sounding quite irritated.

“It not my fault I only noticed the message on my bed 12 mins ago.”

“Wait what you only now noticed the letter.”Arthur would say with his voice losing the irritation with him sounding surprised by Garic lack of awareness.

“Yep, also you haven't been sat here for 6 hours because you were the one who put that note on the cabin door.”

“Well actually it wasn't me but a clone I made.”

“Clone?”Garic said sounding completely confused by what his Master is going on about.

“Yeah, clone that I made by using my ki it not a super useful technique, to be honest as it cuts my power in half but it fun technique to use to prank people.”

“I see...anyway why did you need to see me so urgently.”

“You see Garic I want to test you one last time before you go on your journey.”

“Now that you know it's time to begin the test.” As Arthur finished what he was saying he would leap into action as he gets right up to Garic face and before Garic could react to Arthur. Arthur would send quick jab into Garic stomach as he knocked back 10 feet.”My god you still hit hard.”Garic said as he feels his body aching in pain from Arthur punch. “Well you should have been a lot quicker,” Arthur said in jokingly manner finding it kind of funny.

“Alright let's do this then,”Garic said as he pulls out his blade and dashes towards Arthur as he attempts to do an upward slash to Arthur. Arthur would pull out his sword quick enough to block the attack”Come on you can do better than that.”Arthur says being kind of disappointed with Garic poor attack”You think this my attack.”Garic says in cocky tone as he disappears with Arthur hearing behind him “Lion fang slash”Garic cried out as he fires off a bright yellow wave of ki at Arthur.”Nice trick Garic you're finally learning.”Arthur would mumble as he takes the attack full on with it destroying the upper part of his armour but seeming to have left no damage at all on Arthur. Before Garic could say anything Arthur would raise his blade upwards as the sword becomes infused with bright golden ki with the ki expanding upwards beyond the length of Arthur blade with the bright golden ki stopping its growth as it reaches the skies.

Arthur moved his hand downwards with the giant golden ki blade moving rapidly downwards onto Garic Position with Arthur muttering the words. “Avalon.” Arthur would watch with caution in case his student had dodge the attack with Arthur than feeling the ki signature of Garic all over the place as he looks around with him seeing multiple Yellow ki waves heading to his position.”Nice try Garic you might actually be decent challenge than, your father would be.”Arthur says impressed by Garic with him also trying to provoke Garic. Arthur would place his blade into his sheath as he closes his eyes bright golden aura would begin to emit around Arthur body as he focuses his ki into his blade. Arthur than quickdraws his blade with it emitting bright golden colour with the colour only staying on the blade for second before it disappears with Arthur making a massive golden attack that collides into Garic attack. Garic would appear right in front of Arthur as he slashes his blade downward with him unleashing a burst of ki in front Arthur face with Arthur having no chance to react.

As the disappears, Garic sees his master standing as he claps with still showing no damage had been inflicted on him.”Good work Garic, you come along way from the being that boy I had met years ago.”Arthur says proudly as a few tears drip from his eye.

”Are you crying ?”Garic would say bit embarrassed.

“No there a bit of dust in my eyes that all.”

Arthur says feeling like the moment was ruined a bit.

“You asked for it,” Arthur said as he moved his blade upward with him moving it around in the sky making a circle shape with circle glowing into a bright golden circle with slowly moving down Arthur body as shiny golden armour began to cover Arthur body.

“Wow that incredible how did you do that.”Garic would say shocked to see this power Arthur had been hiding from him. 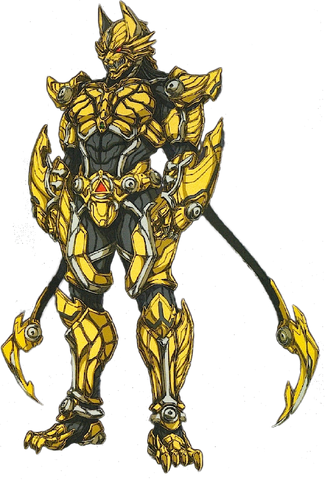 “Well, this something I learned on my journeys with my hopes of you learning to tap into some unknown power on your journey across the universe.”Arthur would say proudly with him appearing right up to Garic face, and lands punch to the stomach again with a bright golden burst of ki coming though Garic stomach where Arthur punch him.Garic would lose unconscious from the attack.

That day would inspire Garic to become even stronger than his master.

Welcome to the World of Dragon Ball!