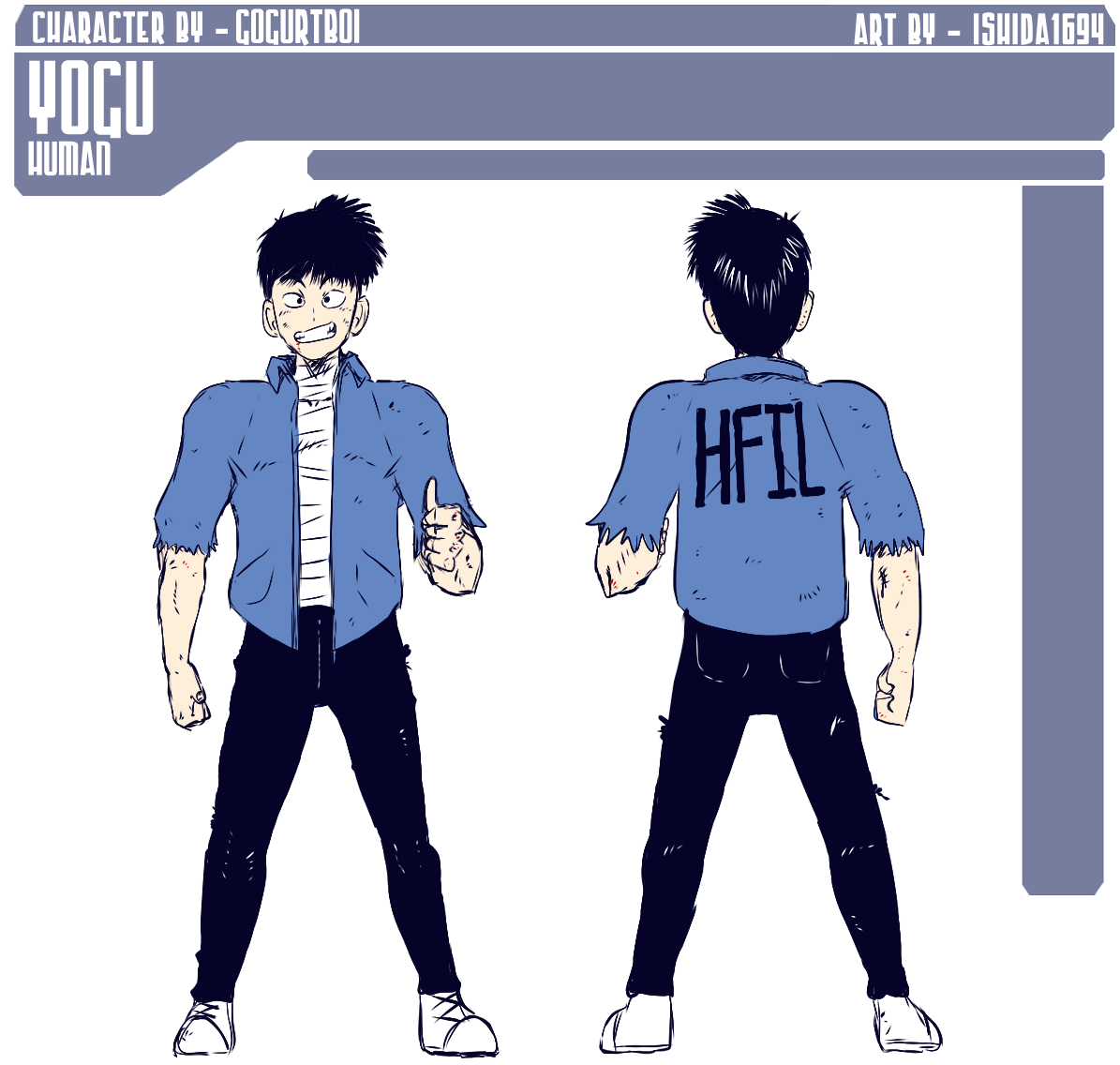 BACKGROUND: Yogu was born into a very traditional family that stuck to its mostly Konatsian roots. Yogu's Great-Grandfather was a Konatsian who came from the planet Konats to settle down on Earth. His great-grandfather was a Martial Artist who trained his children to learn special techniques that were passed down throughout the family. Because of the training, Yogu's family was naturally strong.

Yogu grew up in a middle-class home in South City. In school, he excelled, being a straight-A student for most of his time there. Then his grandfather passed away when Yogu was 13. The death largely affected Yogu and his family, causing them to move to Satan City a year later to get away from the sadness South City gave them. After the move, Yogu's grades dropped significantly and he began to get into fights with other students, skipped classes, and got into other delinquent activities. He quickly gained a reputation and started a gang at Orange Star High School called the "Orange Star Fighters". The gang consisted of him and a few other powerful students. They only had one rival gang, the "Orange Rats" which they got into fights with frequently, mostly over the names of each other's gangs.

OFFENSIVE: [A1] Ki Focus - Yogu focuses his energy on one part of his body, and unleashes a strong attack with it. Deals 33% of Yogu's current PL in damage.
[UA2] Ki Overdrive - Yogu loses control of his ki and attacks with nearly lethal force. Deals 66% of Yogu's current PL in damage.
[MA3] Full-Power Overdrive - Yogu loses control of his ki as well as his emotions, striking with his lethal force. Deals 100% of Yogu's current PL in damage.
[A1] Kanrikosen - A technique Yogu had learned from his time with Kanrin but never used, Yogu fires off a beam of bright, white ki from his fingertip, which flies in a straight line towards his target. A slight variation in firing allows the beam to be tuned to pierce through its target for killing blows, or to strike with concussive force for non-lethal attacks. Deals 33% PL damage.
[UA2] Super Kanrikosen - With Yogu not seeing Kanrin in a while, he's decided to put his own little spin on the technique, letting it build up more and more pressure before releasing, like a Ki Overdrive beam! Deals 66% PL damage.
[SIG] Infinite Overdrive - The perfected version of the technique passed down through Yogu's family for generations... Made even perfect-er!!! Now he can take in his allies energy and add it to his own! What's more, he can actually survive using it now! How's that for character development?! T1: Adaptability (Piercing) T2: Enhancing, Bolster T3: Jack of All Trades (Homing)
[VA3] Ranged Overdrive - Yogu grabs something, puts the power of a ki overdrive into it, and throws it! From a long range, Yogu is able to control his ki to track his enemy down! This technique has the Homing variant. And it deals 66% PL Damage and costs 3KP to use.
[VA3] Spiked Gauntlet Overdrive - A variation of Yogu's Ki Overdrive technique where he focuses his ki into the shape of spiked gauntlets. Yogu designed the variation of the technique specifically to break through ki barriers. It deals 66% of Yogu's current PL in damage and halves the PL of a barrier and costs 3KP. This technique has the Piercing variant.
[VA3] Love Overdrive - A form of the Ki Overdrive technique where Yogu can take in and merge his allies energies with his own, making it incredibly strong! It deals 66% Damage on its own and costs 3KP. This technique has the Merging variant.

BARRIERS: [B1] Overdrive Barrier - A ki barrier technique created by Yogu. He focuses ki into his hands and makes a shape with them, then the ki flows out and creates a barrier with the shape his hands made. Protects Yogu with power equal to 33% of his current PL. If an opposing technique beats the barrier, and Yogu is within 60% of the attack's PL, the damage is halved. If Yogu is lower than 60% of the incoming attack, the damage reduction is only 25%.

UTILITY: [UT1] Telepathy - Upon being brought to Otherworld, Yogu's mind "opened, man." in his own word. He learned several "psychic" abilities, the first being Telepathy.
[UT2] Telepathy - After using Telepathy to try to mess with Kanrin, Yogu got a lot better at it, finding that his range was considerably better than it used to be. Now he could annoy people from far away!
[UT] Energy Sensing - The other Psychic Ability Yogu suddenly learned how to do was Energy Sensing. It's pretty self-explanatory.
[UT] No Control! - Through a burst of rage, Yogu bulks up and his Offensive PL increases by +x2, but at the cost of his Defensive PL is reduced by -x3. It costs 0 KP to use and must be active for two turns before being deactivated.
[UT1] Ki Suppression - During his training in Heaven to learn to lower his ki, he figured out he was able to entirely suppress his ki! The technique costs 0 KP to use and makes Yogu appear at a PL of 1.
[UT2] Ki Setting - Yogu is now capable of setting his power to a lower level to not only hide himself, but also effectively fight while at this level, meaning he can make use of powerful techniques (anything that would consume KP in a KP Battle). This is great training weaker fighters.
[UT3] Ki Intimidation - Yogu is able to take the energy control a step further by temporarily increasing his power level by half! Though, this is simply a bluff, and he cannot use techniques with his new power - it only lasts a turn.
[UT1] Devil Arms - Yogu can make two Monster arms burst out of his sides at will. Pretty useful for punching people when you're charging an attack.
[UT2] Six-Armed Enlightenment - Yogu has become more used to using what little of Monster's abilities he has left, and can now sprout not one, but TWO pairs of Monster arms from his body!
[UT] Long Range Ki Control - Using all of his focus and control, Yogu's able to control his ki after it's left his hand. Whether that's making it stop in mid air, turn course in any direction, etc. This only affects normal ki blasts and not techniques.

Move on to your BP.