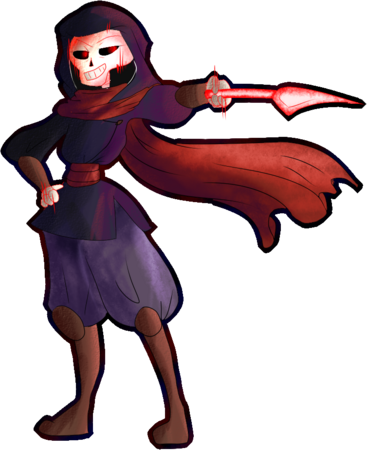 History:
Lily was once a human that lived on Earth. Becoming an orphan at a young age, Lily and a few other children were adopted by a mafia group who had intended on training these children to become bodyguards for the more influential members of the family. Lily, herself was task with protecting the eldest son of the family, the heir to the mafia. From the time she was a young girl, she was taught that she was nothing more than a tool and that her life was completely meaningless if he were to die. The young girl quickly took to the ideology and became nothing more than what they wanted her to be: a disposable tool.

Lily had served her purpose well, protecting him against any sort of danger that came across his way without a second thought. The future heir paid her little to no attention, believing that he was entitled to her protection. As such, Lily lacked any sort of love or care for most of her life and became starved for it, trying to outdo herself in order to get his attention or even a simple thank you. However, she would always get nothing in return.

Eventually, she became aware of a plot to assassinate the current head as well as his son. She was quickly tasked with the order to kill the planned assassins which she intended to do without question. However, as she was just about to fulfil their order, they had offered her a chance to join her, manipulating her emotions by giving her what she wanted: attention and love. This had worked, allowing Lily to break away from her believe that she was a just a tool. Reluctantly, she had agreed to kill the son, as she was the one that was supposed to protect him. However, in reality, the group didn’t expect her to be able to carry this out and wanted her to become the distraction instead, feeding them false information so that they would be able to carry it out later.

Her attempt had failed, with her identity as a traitor being revealed. Because she had betrayed the mafia, Lily was sentenced to execution. However, before she died, she was tortured until she gave up the information about the assassin group. She obliged, but the members didn’t seem to be convinced thinking her claims were outrageous. It was then when she realized that she had also been double crossed by the group. In the last moments of her life, Lily felt nothing but anger and hatred towards both groups. She swore to get revenge.

After her death, Lily’s body was buried in the middle of the desert. While her spirit had moved onto the afterlife, her anger and hatred still remained on the world due to how strong they were. It would eventually manifest, turning into a demonic spirit. However, without a physical body of her own she was unable to do anything but wander around the desert unseen by most but one person.

Leon had also been wandering around when he had come across the malevolent spirit of Lily. Feeling pity for her, he had agreed to help her. Using the bones from her old body and some magic, Leon would allow her to possess the bones of her corpse, giving her a physical body that she would be able to use. For a moment, Lily had forgotten all about her anger, touched by this act of kindness. She eventually decided to serve under Leon as thank you for giving her this new life.

Offensive
[N1] Blight: Summoning magic to her hand, Lily can deliver a palm strike at an opponent, causing 33% of her PL in damage

[UP2] Decay Point: Lily’s “signature” and favorite attack. Creating a red spear made of a combination of ki and magic in her hand, she can throw it at an opponent, causing 66% of her PL in damage.

[MP3]Call of the Dead: Lily is able to emit a blast of a chilling white mist from her hands that will cause 100% of her PL in damage if it hits.

[N1] Soul Shield: Reinforcing her body with magic, Lily is able to harden her bones, protecting her from any attack underneath 33% of her PL in damage. If an attack is over 33%, and Lily is within 65% of the attack’s PL the damage is halved. Otherwise it’s only quartered.

Support
Splitting Soul [UT1]: By spreading her spirit to possess the bones of anything nearby to create another body for herself, Lily can fight as if there were to of her. Her power is divide in half between her original body and her new one. (Flavored Multiform)

Broken Body [SU1]: Lily is able to collapse her body into a pile of bones before quickly reforming in order to allow her to dodge any attack under 100% of her PL.

Note: I'd like to invest all of my current XP into Lily. Because she is more than twice my PL, the conversion is now 1.25PL per XP.