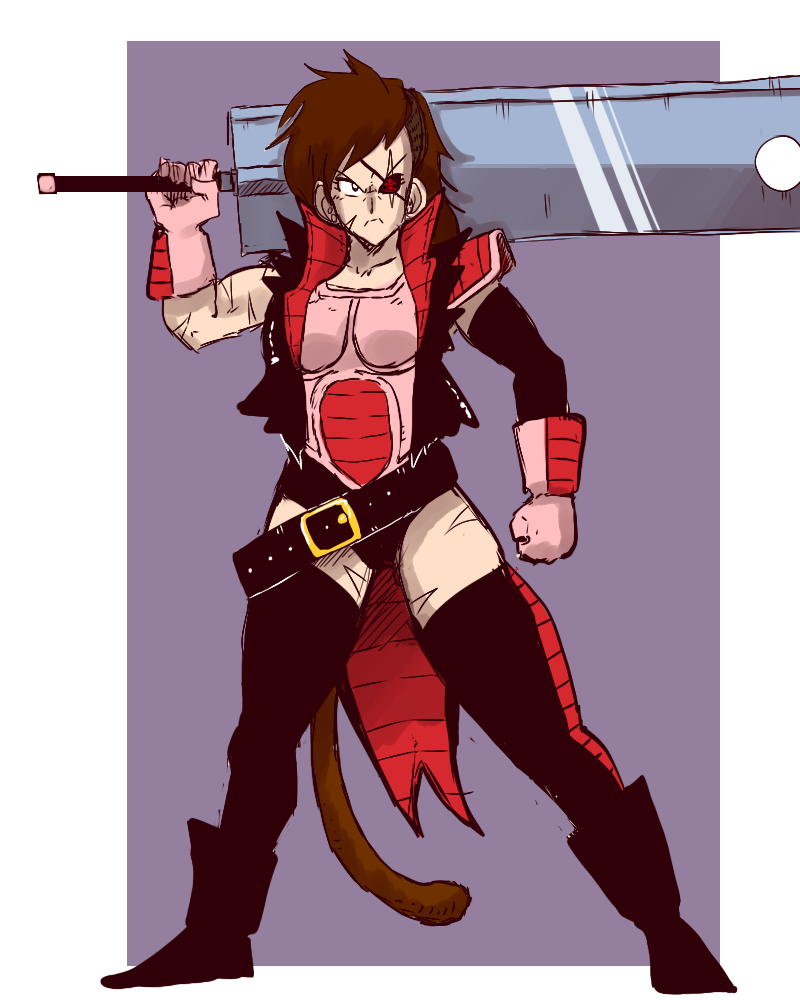 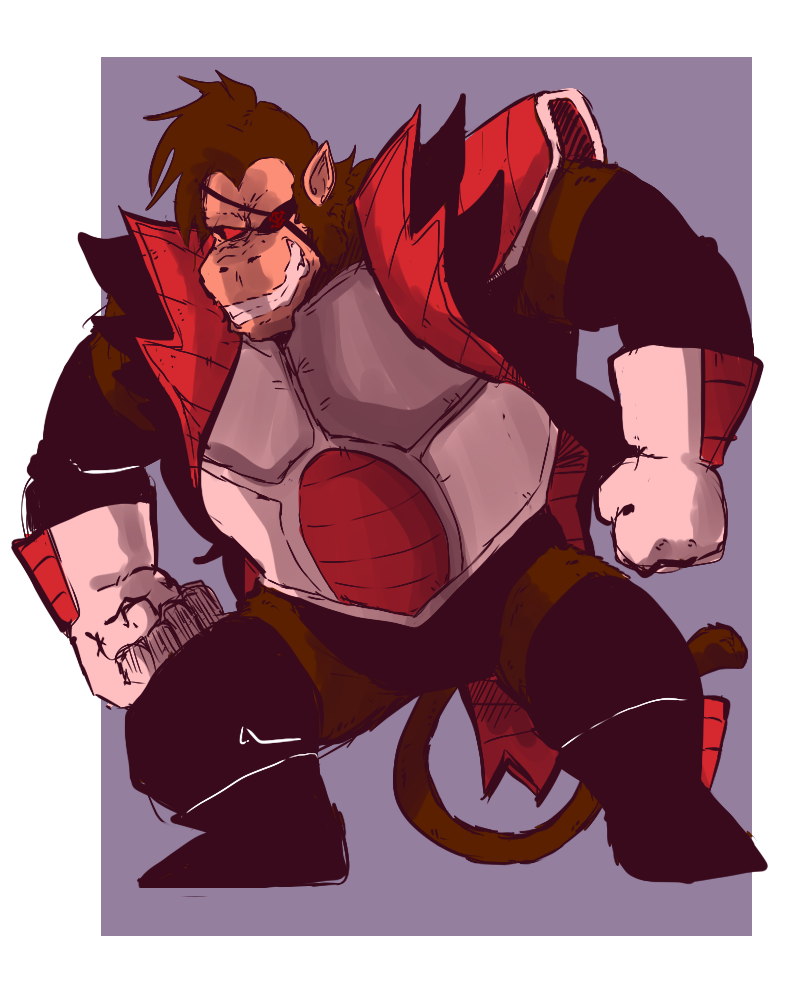 BACKGROUND:
Kayen’s story begins a long time ago, over two hundred years ago, when the Saiyan Kingdom was still the Saiyan Solar Empire. It was during this time that a girl born to a not particularly notable mid-class family, had she been a pure Saiyan the girl likely would have lived a very standard Saiyan life, however, she was only half Saiyan, her father a Human. The Empire was not kind to half Saiyans forcing the girl to grow strong or be cast aside.

Despite all odds, the young hybrid girl grew up to become Queen. The third Super Saiyan to take the reigns of the Empire Habana to lead it against the Mazoku until ultimately peace was settled between the universal superpowers.

Once peace was finally achieved and Habana was able to set in motion some of her plans to reform the Empire she quickly found the role of Queen far less enjoyable during an era of peace. The new vision for the Empire that she had sought to create was unfortunately not the right place for her.

So she stood down, let her Commander take up the bulk of the running of the Empire until a new monarch could be figured out and sought to explore the universe, traveling for a time with her once adversary the Mazoku Lord Xylo before deciding to settle in one of the planets on the further edge of her Empire.

Habana had no love for her family outside of her mother, and so in an effort to guarantee both give a final spite against them and ensure some part of her lived on Habana made sure she had an heir with the ‘help’ of a close friend.

Her family ultimately continued on on that planet mixing with the rest of the Saiyan population that lead it, not growing exceptionally large but maintaining itself enough to remember their history, eventually, the planet fell out of the grasp of the Empire, now a Kingdom.

The family most directly descended from Habana eventually produced a young girl born with exceptional strength, Kayen. Kayen grew up loving the stories of the age of the Super Warriors, the Wars with Arcose, the Mazoku, Earth. It painted such an amazing picture for the girl.

As she grew older she began to ask harder questions, why it was that they remained so distant from everything, why the ‘Empire’ had become just a Kingdom and why it was that the world had gotten so weak compared to the glory of the past.

The simple answer she had received was peace. There was no need for such absurd power in an age of peace, eventually, the greatest warriors had vanished, passed on, or grown too old to use there full might.

Kayen hated this answer, she was strong and she knew it but wanted to be MORE, she wanted to be as great and powerful as the Queens of the past, Vennel, Zucceta, and most importantly her own ancestor Habana.

As she grew older Kayen pushed herself harder and tried her best to stir a similar sort of vigor in the others, wanting to inspire them to seize the greatness they KNEW was possible. But so many others were fine with the peace that had fallen over them, it made Kayen sick.

At sixteen Kayen made a decision, the peace that permeated the universe was clearly holding everyone back from there true potential, most importantly herself, she gathered what few others she knew were interested in being something more and in the night she raided her family home, taking with her several of Habana’s keepsakes and with her group took to the stars.

Kayen spent the next few years an absolute scourge on the universe, she took up residence on the Raiti-Zacro asteroid and with her ever-growing crew struck at the great powers that still remained harassing and raiding Trade Fleet and Saiyan Kingdom ships in equal measure.

She became the unofficial ‘leader’ of the asteroid, however, her best efforts seemed for naught, try as they might to spark greater hostility things still ultimately remained peaceful.. Until the Fleet made their move.

They took Vegeta from the Saiyans, a move that took even Kayen off guard, driving her race off of there home and all the way into hiding on Earth. It was the ultimate and most disgusting example of how far her people had fallen. None of the Queens would have allowed such a thing.

So Kayen began planning, and training in even greater earnest, she had her crew strike at bigger and more dangerous targets every day to prepare herself, with the recent news of the Fleet seeking to SELL Vegeta finally reaching her it was the last straw. She gave temporary command to her second, gathered her things and took off on her own.

Her crew could join her later, she had business to handle personally first.

ACTION TECHNIQUES:
[A1] Demon Fang - Kayen takes a mighty swing with Fateburn bolstering it with her own power, in close range, this simply enhances the blades cutting power but it can also be used to unleash the power flowing through the blade to produce a powerful and razor-sharp energy wave. [Basic attack, 1 KP, 33% PL]

[MA3] Rebellion Star - Inspired by a technique from the stories of her ancestor’s greatest opponents the Rebellion Star is the most powerful ‘basic’ version of the Demon Fang a five-point strike attack made with incredible speed. [3KP, 100% PL]


SUPPORT TECHNIQUES:
[SU1] Untouchable - While not quite the outright precognition of her ancestor many members of Kayen's family have inherited the ability to read basic insights into the future to aid in avoiding attacks giving the visual impression that they are able to sidestep most attacks with ease. [Basic Afterimage, 1 KP 100% Dodge]

[UT] Ultrasense - Kayen like Habana before her has had a form of instinctual energy sensing from a young age, while not technically any better than the norm Kayen is exceptionally proficient with it allowing her a greater understanding of what she is taking in. [Energy Sensing]

ACTION SIGNATURE:
[SIG] FINAL SLASH! - [T1 - Pure Power] An adaptation of her ancestor's Final Flash, the Final Slash utilizes similar arm motions and energy mixing methods but channels them into an arc of energy, generally requiring a sword or other bladed weapon to perform it could theoretically be performed with the edge of her hand at potential risk of injury.

[SU] Blood Moon - Kayen performs a technique similar to the standard Power Ball technique however the 'ball' created has an eerie red glow similar to Kayen's aura when she uses the Ruby Pendant. Otherwise functions identically to the Power Ball.

"This technique functions like a Blutz Generator that can only affect the user without the need for the item. Additionally, the user can enhance the Power Ball by spending 1 KP, if they do so they gain a +x1 to their Offensive PL for the rest of the thread. Doing so counts as your use of a Support Technique for that post. This Assist SIG costs 4 technique slots and requires no prerequisite technique. This technique can only be used once per thread and cannot be destroyed without permission."

I'm not entirely sure if Habana would approve of her descendant...
Regardless, you're APPROVED to go ahead and cause some chaos! Your New Game+ XP will be added momentarily.
Last Edit: Sept 8, 2018 22:49:05 GMT -6 by Sketch: Bold