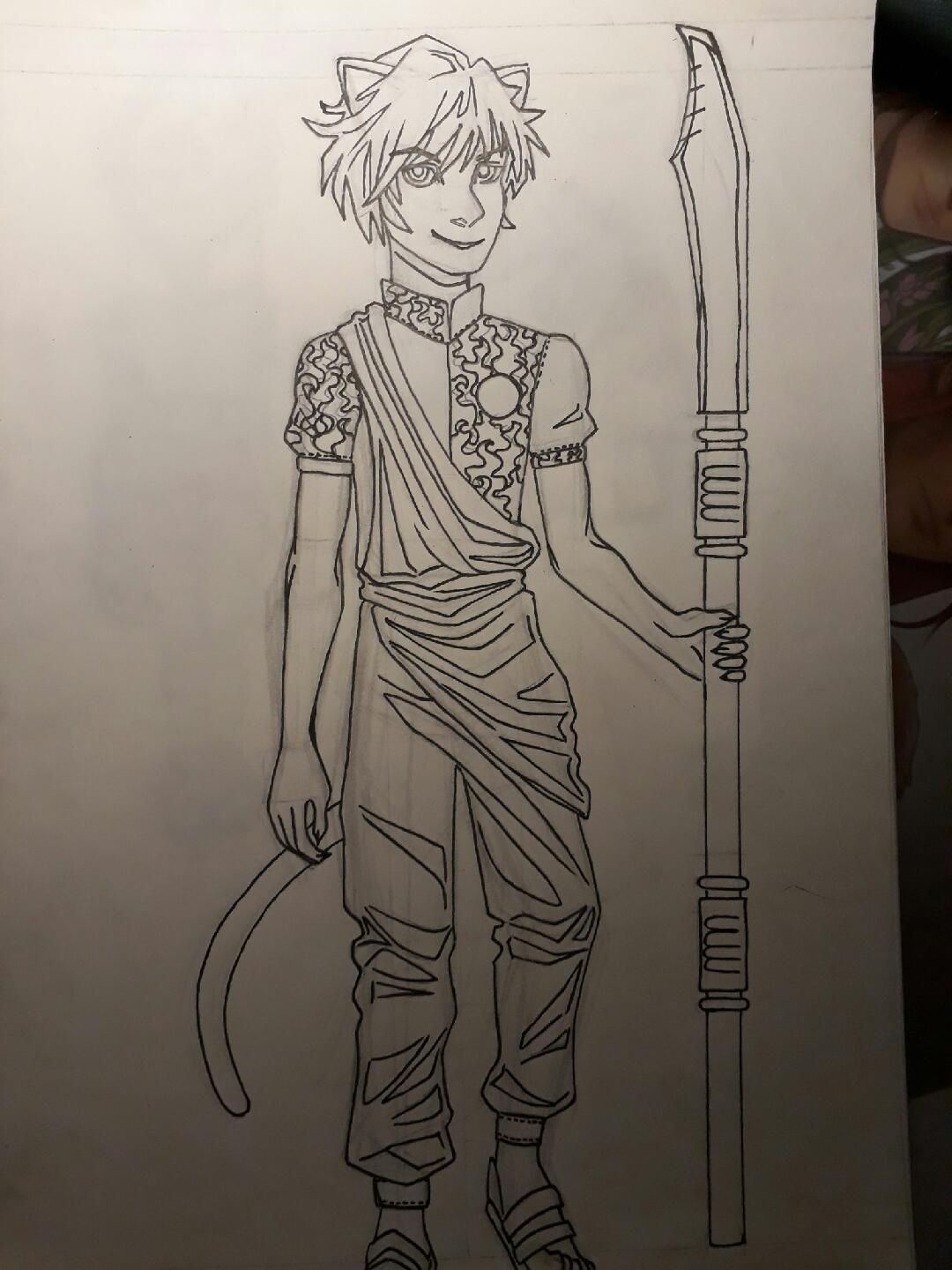 BACKGROUND: The Blue Bros were infamous for their constant breakouts of fights. Before they were sent on their quest they were quite the trouble makers and constantly got on everyone’s nerves. Perry, their mother, was no stranger to these outbursts and was always quick to put a stop to them before someone got hurt. Perry had to physically separate them just to calm them down in the slightest, although there was one trick up her sleeve that could silence even the greatest of menaces.

No longer than a second after the words were registered by the brothers, their attention snapped from each other to Perry as they both ran over and sat down, cross-legged. With wide eyes, they inspected every movement that their mother’s mouth made. “So you guys haven’t heard much about your legendary grandfather, right?”

Pyrus and Nashi fidgeted around as they recalled the loose bits and pieces of information they could recall from previous story times.

“He beat up the biggest baddie in the universe!” Shouted Pyrus as he energetically waved his hand around in the air.

“No, no! He didn’t beat him up, it’s obvious he used his diplomatic skill to make a peace treaty with the infamous tyrant!” Nashi poked his tongue out at Pyrus as a way to express his dominance over his younger brother.

“Alright you two, settle down now.” Perry always knew how to keep them in order. The two boys settled back down as she started her story. “Your grandfather, Quince, was a hero of Earth, he was a mighty warrior and a cunning diplomat. One day when some dazzling maiden fell in love with Quince, their energy manifested my very being.” Perry couldn’t help but laugh when the two boys pretended to vomit at the mention of love. Imagine how they’d react if she told them how she was actually conceived. “Now listen up, this is where the story becomes top-secret! After serving his time on our beautiful planet, he had finally decided it was time to spread his grace to those outside of our solar system. With his mighty power he devised a blood-powered rocket that was capable of space-travel!”

The faces of the boys lit up with massive amounts of excitement as they learnt of Quince’s amazing amazingness.

“He was so talented, in fact, that he was even able to withstand the conditions of space while still breathing! Before long he formed an elite team of fighters and diplomats that brought peace to the galaxy. While that was happening, Mom— my mom— and I moved here, to the North Capital! Unfortunately, as you both know, she passed away due to the Trolley Incident.”

“Ah, yes the Trolley Incident.” Recalled the bros in synchronisation. She just never saw it coming…

“I decided that it was time for me to grow up and adventure a bit. I didn’t know where to start but I really wanted to follow my passions. So, to start—”

“Oh, come on, we already heard this bit!” Nashi shouted out as he sensed her beginning a life story.

“Yeah, come on. Where the fighting at?!” Pyrus insisted.

“Wow, I didn’t know you had such little interest in my personal life. You’d be surprised how cool it is to—”

“Fighting, now.” Gee, Pyrus. Not very kind to your mother, are you?

“OK, OK, whatever. I’ll skip to the fighting. Monad, your father, felt like we needed to embrace our family’s legacy of the Senbyo. Anyway, we didn’t know where the lookout was and still don’t so we just, sort of, waited for something to happen.” Her eyes shifted and seemed to look past the brothers in remembrance. “Before long, even Quince passed away and his funeral back here, on Earth. Now, let’s just say that, ahem, your father committed a horrible faux pas and, welllll... While that action alone didn’t tip any scales, it was the fact that Monad said excuse you, implying he had the right to excuse the disrespect that my sneeze had against ceremony. For an agricultural race, they were definitely strict on manners as they attacked before we realised what we even did wrong.” In fact, for quite a while after, they still hadn’t figured it out.

“You know when we asked for fighting, we didn’t mean that. Can you build up to all the actual fighting?” Pyrus pressed on about his obsession with the fights scenes of this story.

She ignored him and continued with the story; she was up to the fighting anyway. “Sorry if this isn’t going to be as big of a fight as you were hoping but there were only two aliens, each armed with a small blaster. They immediately fired at us but we were quick enough to just side step out of the way. With quick and precise movements, we only got a few jabs in before they were crawling on the ground in pain. We then said goodbye to Quin—”

“Hang on, wasn’t the funeral just last week? Why would you tell this us now? It’d be a way better story in a couple years time, you know, when we’d care!” Nashi tried to explain his reasoning but he didn’t really care about the answers, in his head he already thought he was correct. And that’s all that matters.

Perry handed the pole, the one that once belonged to Quince, to the two brothers. They each held one end and, not before long, were playing tug-of-war with it. “I hope it helps you on your journey.” Handing a map to Pyrus, his instinctive desire to grab that too caused Nashi to win the tug-of-war between the two before, nigh-immediately, Pyrus pounced on him and the competition for the pole began again. “H-Hey! Careful!” But they weren’t being careful, not at all. “You might damage the map!” The map, of course, was drawn by Pyrus in his sleep, although it was drawn so poorly that it would probably be of more help as a placebo.

The two brothers, each pulling on an end of the staff were too engrossed in their friendly competition to notice that the long staff was beginning to strain under the stress. Perry rushed between them and, with a sword the brothers didn’t know she had, cut the long staff into two moderately-sized staves— Purrah Poles— with an audible swing.

”What’s going on in there?” Came a concerned voice from the other room. It was Monad’s, who was at that time cutting up vegetables for what would be Monad and Perry’s first lunch alone in a while.

“Nothing, dear! Everything’s fine.” She eyed her two sons to make sure that it would remain nothing and smiled when they came back together. “See, that wasn’t so bad. Now there are two of them, so you don’t have to fight. Come here, come here…” But they didn’t come to her, instead, she stepped towards and grabbed them.

After a big, involuntary hug for each of them and a forced kiss good luck, they were sent on their quest to find the lookout. As they left through the front door, Pyrus and Nashi looked back to see Perry smiling and holding back tears and their father, Monad, aproned and by the kitchen door, warmly smiling and waving them goodbye.

As they left, they realized their only problem: neither of them knew where they were going, and the map has no coherent markings at all.

TECHNIQUES:
OFFENSIVE TECHNIQUES:
[N1] Blue Bro Ball: Drawing energy from his body he focuses it to a single point in his hand, creating a sphere of energy that be can propel in any direction. The same can be done to his weapon or any other part of his body. It deals 33% of Pyrus’ PL as damage. Costs 1 KP.
[UP2] Blue Bro Beam: By using the same method as its level one variant, Blue Bro Beam creates a beam of energy that is literally many Blue Bro Balls close together. The generation of extra Ki balls and the additional energy required makes it more tiring. It deals 66% of Pyrus’ PL as damage. Costs 2 KP.

SUPPORT TECHNIQUES:
[SU1] Blue Bro Burst (Zanzoken): This famous technique was invented by Pyrus’ ancestors. Through a sudden burst of speed, Pyrus leaves behind a static image of himself to distract his opponent, this technique allows him to completely dodge techniques beneath 100% of his PL. Costs 1 KP.

Pyrus Nice job! I thoroughly enjoyed this. Go on and start your BP, and welcome 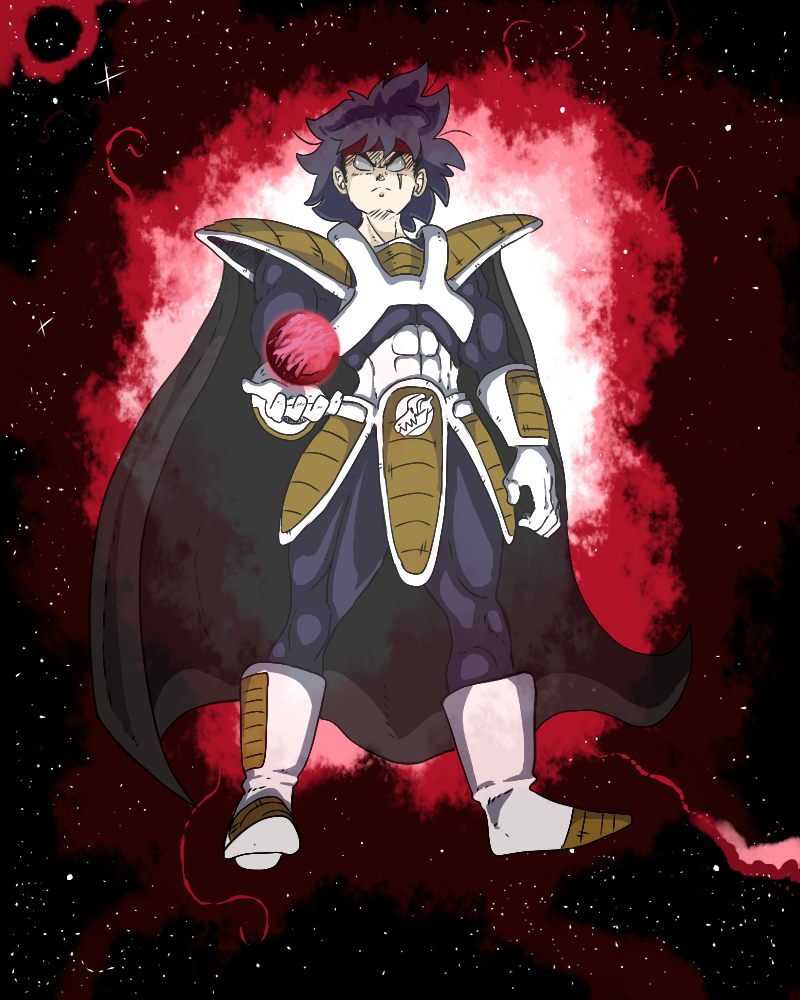