The library on the Lookout was more extensive than Chime had been expecting. Really, all the rooms of the main sanctum were larger than it seemed they should be, just a touch. Nothing labyrinthine, but enough to be noticable. It turned what should have been a small side-room into a an impressive library. The books and scrolls inside were ancient, much, much older than Chime himself, and most were covered in a furry layer of dust. How long had it been since someone had tended to this Lookout properly, full-time? How long had it been here?

The texts were arranged roughly by age, at least, with the oldest at the back of the room, and getting newer the closer they got to the main door. It wasn’t any sort of official filing system, simple the Guardians over the years filling up the library with tomes they wrote or acquired as the years went on. The oldest ones, at the farthest corner of the room, were largely unreadable. The scrolls were to dry and brittle that they couldn’t be rolled properly anymore, and were simply laid flat between the pages of other books that were nearly as old. The text was worn and faded, and only the barest bits and pieces were legible. He was able to make out the date on one of them, though what the rest of the text was about, he had no idea.

“Age 753?!” Chime shouted aloud as he read it, and his voice echoed through the library chamber, “But it’s 3018 now, I think, by Earth’s calendar, that’s...” he took a moment to count on his fingers and do the math, and when he finished he gasped, “That’s over 2,200 years! You’ve been here that long?” He addressed the empty room, and the Lookout itself, directly. He wasn’t expecting an answer, of course, and carefully set that ancient book back to move onto the next.

From what he could gather, most of the library was notes written by previous Guardians themselves, about whatever was going on around the planet at the time. Chime ended up sitting on the floor of the library, surrounded by open books, looking from one text to the next, trying to piece together a proper history of the Lookout and its Guardians from the patchwork he had.
Eventually, he came upon a book that had something written in the margins, something recent. Well, relatively recent. The ink was still faded, but not nearly as faded as everything else he’d seen so far, and it was clearly legible, in simple, neat handwriting:

Chime squinted down at the passage it was written next to. It certainly said B...something, M...something, but was hard to make out. The mysterious note taker’s guess was as good as his. He noted the asterix at the end of the note, and followed it down to the bottom of the page, where he saw written in bold letters, but unmistakably the same handwriting:

He couldn’t help himself, he doubled over giggling as he imagined his predecessor’s plight. It really shouldn’t have been that funny, but clearly the old Guardian had been okay, if they had gotten back here to write that note. Chime put the old book back in its place, and kept an eye out for more notes from that helpful predecessor as he went on. As it turned out, there were quite a few of them, filling in the blanks in many places where the original text had faded away, though respectfully writing in the margins, never directly over the lines, even if they were illegible. His trust in the notes was iffy, after the bugs/bears mixup, but the note-taker had been looking at less worn versions of these texts than Chime was, so some of them had to be correct.

That got him to wondering. The ink of those notes was the newest thing he’d seen in the library, but it was still pretty old looking. How long ago did that helpful, annotating Guardian live? Chime knew they couldn’t still be alive, or else there would be no need for him to become the new Guardian now. Even so, that fact made him sad. He’d started to feel a kinship with that notetaker, after spending what was now many hours in the library, reading the excitable way they would phrase their notes. They seemed like someone he could have been friends with, if the stars had aligned differently. But even if that Guardian was gone, maybe someone that had known them was still around? Maybe he could find them, talk to them, get some insight on what he should do as the Guardian of Earth.

Eventually, Chime came to a leatherbound book, placed on the shelves nearest the door. The most recent entries to the library. The leather was dry, and cracked as he opened the book, even as he tried to be careful with it. He was struck immediately with the familiarity of the text within: it was the handwriting of the friendly notetaker! Chime beamed, but his joy was struck short when he read the first line:

Chime let out a slow breath. 2803...that was over two-hundred years ago. Any hope of meeting friends of this old Kami went out in a blink. He knew Earthlings didn’t live that long, not under normal circumstances. He let his head fall back to gaze up at the ceiling, “...Wow. You’ve been alone a long time, haven’t you?” he said, addressing the Lookout directly once again. Chime wasn’t one that typically spoke to inanimate objects, but there was something about this place, a presence he couldn’t explain. It felt as if something this ancient had to have some personality of its own, simply from existing for so many years.

He pushed past his disappointment and continued to flip through the journal, learning about the goings-on of two-hundred years ago. It was an eventful and interesting time period, to be sure, but none of it helped him in the here and now, on his quest to become the new Kami. That was, until he came to one of the very last entries in the journal:

...I’ve set the statue of Shenron away in the inner sanctum. My protections should hold for a good long while.

The statue? Earth would have a statue of their dragon, the same as they had one for Porunga back on Namek. But Chime hadn’t known where it was on this world, or if it was even in one piece. He’d been hoping to find some clues to its location here, but if the statue itself was here, intact and safe...it was more than he’d been hoping for. He snapped the book shut without bothering to read any further when a realization hit him, and in an instant, he was on his feet and scrambling down the halls.

Of course! It made so much sense now! That vague, ancient presence he’d been attributing to the Lookout, it wasn’t the Lookout at all, it was the Eternal Dragon of Earth! Even dormant, it exuded a feeling that Chime couldn’t shake. If he’d been asked to explain it to someone, he wouldn’t have been able to, it was just something innate, like the sense one got when they were being watched. The unmistakable gut feeling of ‘I am not alone here.’

The little Namekian slid to a stop, so quickly he almost toppled over, before a set of ornate double doors. They looked important, and they were roughly in the center of the building. This had to be it. The only problem was, there were no visible handles on the doors, and Chime couldn’t push them open, no matter how hard he tried. The notes had said there was some sort of ‘protection’ placed on the sanctum. How was he supposed to get in, then? He could try and blast it down, but that might damage the statue inside, and he didn’t exactly want to start blowing up parts of the Lookout. Maybe there was another way in, a hidden entrance? But that was a long shot. It was a protected sanctum, why would they put extra doors? Maybe there was a password? That was an idea. Something only the Guardian would know. But what would that be?

Chime paced for a minute more as he tried to puzzle it out, then finally stopped, and stood before the doors. He placed his hand on them, channeled the barest bit of ki into his palm, and spoke in Namekian the most likely password he’d been able to think of:

The words rolled off his tongue easily. He’d memorized them years ago, as had all the acolytes in his temple back home, though he’d never had to use them. The phrase for summoning the Eternal Dragon of Namek, Porunga. But as he stood there, with his hand on the doors...nothing seemed to happen. Chime felt disappointed and lost for a moment, before it clicked in his mind. He wasn’t here to see Porunga, after all. And so, he spoke again:

The doors to the sanctum slid open. The inside was pitch dark, but only for a moment-- as soon as Chime stepped through the threshold, two torch sconces lit, one on either side of the door. Perfectly white, magic flames illuminated the chamber, which was much smaller than he’d been expecting. The only thing inside was a table, against the far wall, which held three objects, all equally coated in dust. One was a wooden staff, taller than Chime was, unremarkable except for the crooked piece on top. Another was a badge of some sort, metal, that seemed to be the planet Earth inset into the petals of a flower. Twin red tassels hung from it, and there was a pin on the back, so it could be worn. The last item was the glass case, domed and set on a golden pedestal, it couldn’t be bigger than Chime’s head. The dust covering it obscured what was inside, but the Kami-to-be knew what it was, before he wiped it away. He looked down into the stony face of the miniature dragon, and smiled. 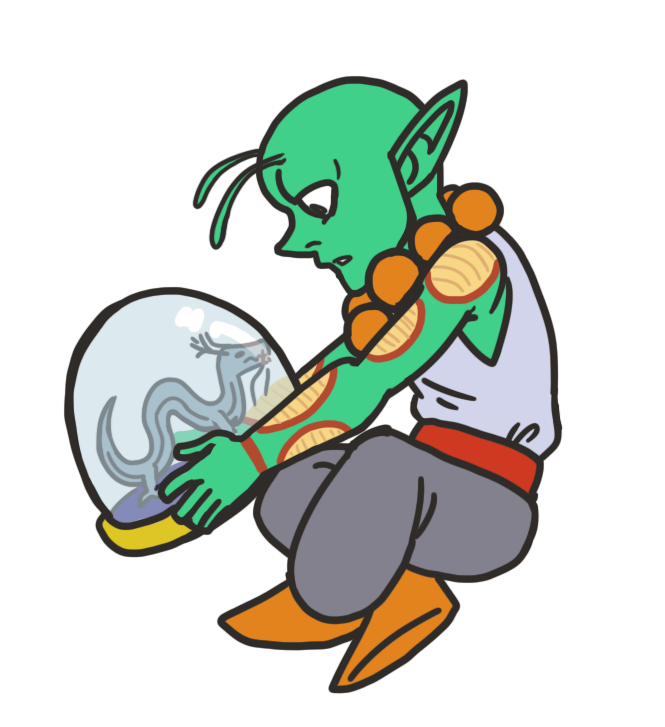 Shenron might not be able to speak just yet, but he's happy to see you. 1560 XP for Chime!
Reply