A 5'10 tall male with spiky blue hair, a strand of hair hanging loose from the forehead, his body resembles a bodybuilder with refined muscles. His attire is a black Gi with a matching undershirt, forest green pants, black fingerless gloves and sporting black boots.

Russ is a passionate individual with a belief about villains who are rich don't deserve to have every zeni under their name, he will hunt down his adversaries and steal their zeni for their wrongdoings, often catching them in the act or hear about their exploits from the news or elsewhere. The zeni he collects will be given to those who need it from his perspective. He has a good natured heart and will turn a blind eye if a villain has proven themselves to not be a bad person.


Russ was born and raised in Ginger Town on Earth by two parents, Patoa (Potato) a female saiyan, and Doriyoki (Dorayaki bread) a human male. Growing up the family suffered from financial troubles for various reasons, Doriyoki volunteered to work in an animal shelter because of his dream to be a vet, he refuses to apply for a job because it will steer him away from his ambition. He received money from people who are generous to give him tips. Patoa is a martial arts instructor who teaches students the basic form of punching and kicking as well as different variations of it, she charges 20 zeni per lesson. There are times she received less pay due to a small number of students showing up to class, she taught Russé how to fight.


The money between the family is split to pay bills, food, clothes and for Russ to go to school for his education. Russ attended a university to study Ki manipulation out of a desire to become a great fighter.  He is taught how to fly, utilize Ki-in various forms, energy sensing and the solar flare technique. He became acquainted with Mortica and Tyco, occasionally having conversations with them before tending to his own affairs. One day he dropped out of school because he couldn't afford to pay for his classes, this began to change his life forever. For a time he was frustrated with himself for not being good enough to stay in school with a scholarship, he desired to earn enough money to support himself and the family by going into tournaments however he was afraid his power won't be enough to achieve his dream.


One day the half saiyan watched a television program about a man who would steal from the rich and give to the poor, his actions awestruck the young lad, lead him to wonder how many people out there are less fortunate like himself.


The following day he flew to West City to reflect on his current situation until he spotted a man harassing a mother and her child with a weapon, forcing her to give up all of her zeni in exchange for her life. Russ didn't want to witness another person being in financial debt, he sprung into action. He defeated the troublemaker using the skills he was taught. He returned the money to the civilian, both her and the child expressed her gratitude, told him he is a hero. Those words permanently burned into his mind sparking a new goal, inspired by the thief he watched on TV, he dedicated his life to make sure the innocent won't have to suffer from the greedy hands of villains ever again.

[A1] Root Cannon: A destructive energy wave, Russ places his hands together at the height of his chest, the left hand positioned above his right hand with the latter balled into a fist. He thrusts both hands forward releasing a large teal-colored Ki Beam, packing enough power to cause collateral damage.

(UA2) Super Root Cannon: A more powerful version of Root Cannon, Russ places his hands together in the same formation as the regular version. Upon the release of an energy wave, the Ki Beam is much larger than its predecessor, causing devastating damage.

[MA3] Final Root Cannon: The most powerful version of Root Cannon, Russ's hand formation remains unchanged from its weaker predecessors as its essentially the standard energy wave but amplified tenfold. The size of the Beam is large enough to pierce the stars and the mountains.

[VA2 Homing] Zeni Scatter: An offshoot of Root Cannon, the half-saiyan draw his arms backward and gather a concentrated aura of Ki around both hands, thrusting arms forward to fire a volley of energy blasts.

[B1] Dollar Sign: Through some proper Ki Manipulation, Russ gained the ability to summon a barrier made of Ki! Protects him with power equal to 33% of your current PL. If an opposing technique beats his barrier, and the Barrier user is within 60% of the attack's PL, the damage is halved. (IE: If a Ki Barrier had 2,000 PL, and was broken by a 3,000 PL attack, the bleed-through damage would be 500 PL instead of 1,000). If the Barrier user is lower than 60% of the incoming attack, the damage reduction is only 25%.

[SU1] Solar Flare: Russ will use his Ki to cast a bright light akin to a flash-bang grenade, useful to blind his foes to give him an opportunity to escape or plan his next attack.

[SU1] Tax Evasion: Russ's body leaves behind a visual effect of a Zeni symbol when struck for cosmetic purposes, otherwise its essentially afterimage.

[UT] Bulking: By some means, usually via a significant increase in muscle mass, you increase your offensive power at the cost of your defenses, this results in an increase of your offensive PL by +x1 and a decrease of your defensive PL by -x3. You must have a transformation that provides at least +x3 defensive PL to use this technique. Using Bulking costs 0 KP in a KP Battle. It must be active for at least two turns before being deactivated (including the turn it was activated on), and can only be deactivated at the end of a turn, after completing all necessary defensive calculations. Transformations that require bulking must also adhere to this.

[UT] Energy Sense: Russ gained the ability to sense the life force and power level of all forms of life.

[UT1] Energy Suppression: Russ is capable of suppressing his power in order to better hide from the gaze of those with Energy Sensing or those utilizing a Scouter.

[UT] Energy Setting: Russ is capable of setting his power to a lower level to not only hide but also effectively fight while at this level, meaning he can make use of powerful techniques (anything that would consume KP in a KP Battle). This is great for people who want to train weaker fighters.

[UT1] Tail Training: Russ trained away his tail's weakness to be more effective in combat[/font]

[UT2] Oozaru Mastery: Through harsh training and sheer willpower Russ learned to control his inner beast, maintaining full control of himself while transformed into an Oozaru.

[Assist SIG] Power Ball:This technique functions like a Blutz Generator that can only affects a single target without the need for the item. Additionally, the user can enhance the Power Ball by spending 1 KP, if they do so the effected character gains a +x2 to their Offensive PL for the rest of the thread. Doing so counts as your use of a Support Technique for that post. Power Ball only effects characters that have a Blutz dependant transformation(Saiyans, Alien C, Aliens with Moon Boon) This Assist SIG costs 4 technique slots and requires no prerequisite technique. This technique can only be used once per thread and cannot be destroyed without permission. 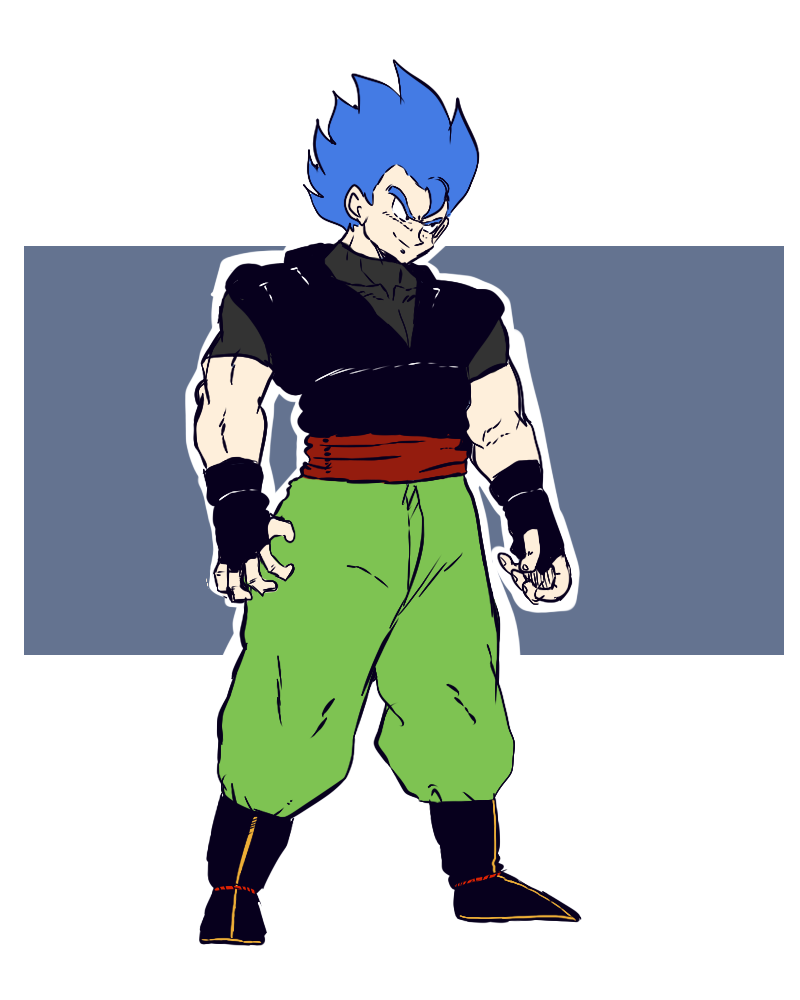 Hi there Russ. Your application is good, but there are a couple things to note. First, you should try to stick to one tense throughout your application (past-tense preferred). Additionally, you should probably fix up the math for his species.

I'll make the adjustments thank you!