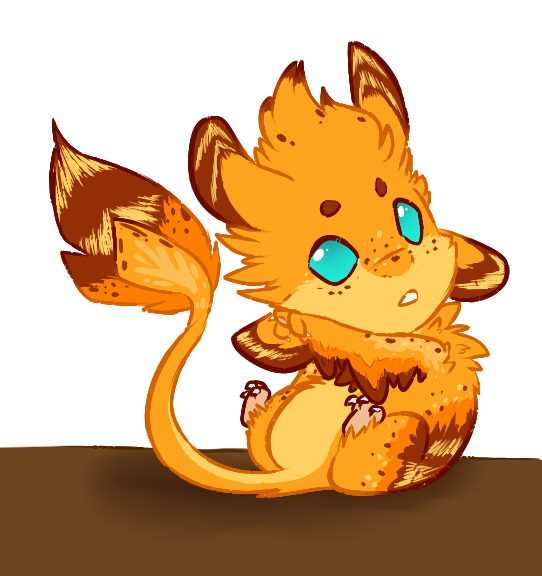 Art by Sketch
ABOUT
This golden ball of feathers can come across as rather hyperactive at times, seeming to want to climb anything he sets his mind to, he tends to cause a mess because of this and can appear a little reckless to most but he always means well. He has a strong bond and love for music but can't pin point exactly why and overall hasn't got much of a clue which direction his life will lead. Deep down he feels there's something that needs to be replaced and filled, but he's not sure what it is yet or if he ever will achieve such. Not one to leave others in danger if he can do anything about it, Pankaa cares deeply for those he forms bonds with, although he isn't always the best at showing it or shows it through a bit of cheek.
He's young, curious and ever so eager to learn more after his life took a curve ball, causing him to end up on the odd planet known as Earth. 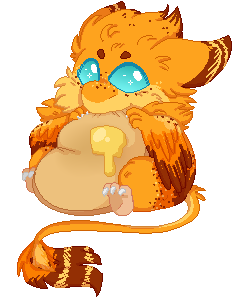 Art by Jessiiroo
APPEARANCE
Pankaa has brilliantly golden feathers with brown, orange and creamy golden markings, bright cyan eyes and creamy coloured feet and paw pads on the bottom of his "hands". He has a spade headed tail tip, four long and rather bunny-like ears, a stylized hair tuft and baby wings still developing along his arms. Baby feathers are starting to sprout out along his waist line as well to form more back feathers. He has excess fluff and feathers around his neck as well. Overall his colours mashed together match similarly to that of a pancake with maple syrup, which is how he earnt his name. When standing on his hind legs he is around 1ft tall (Around 30cm)
He can fluff out his back feathers that spread around his hip and waist area when he pleases, but it tends to be out of emotional responses. 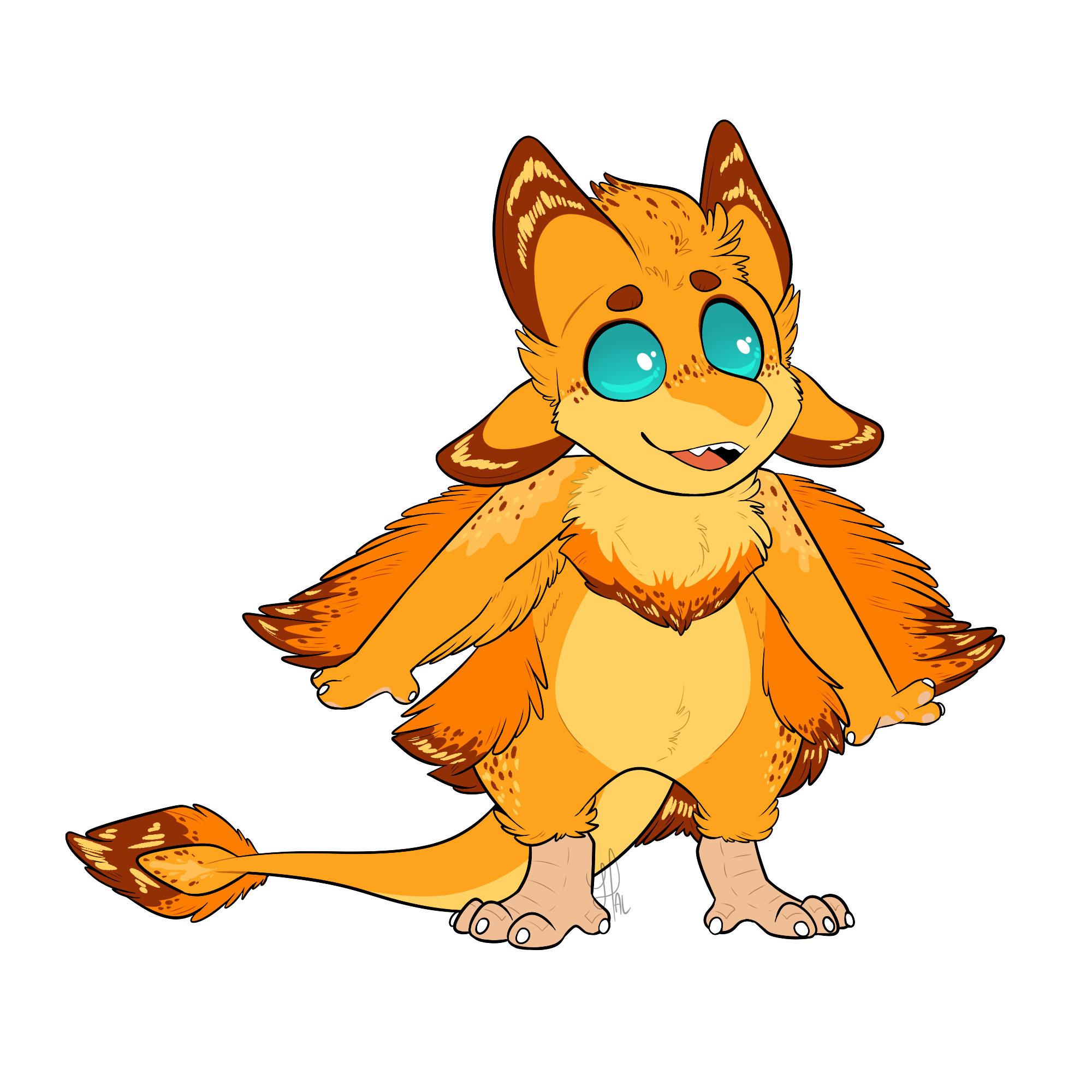 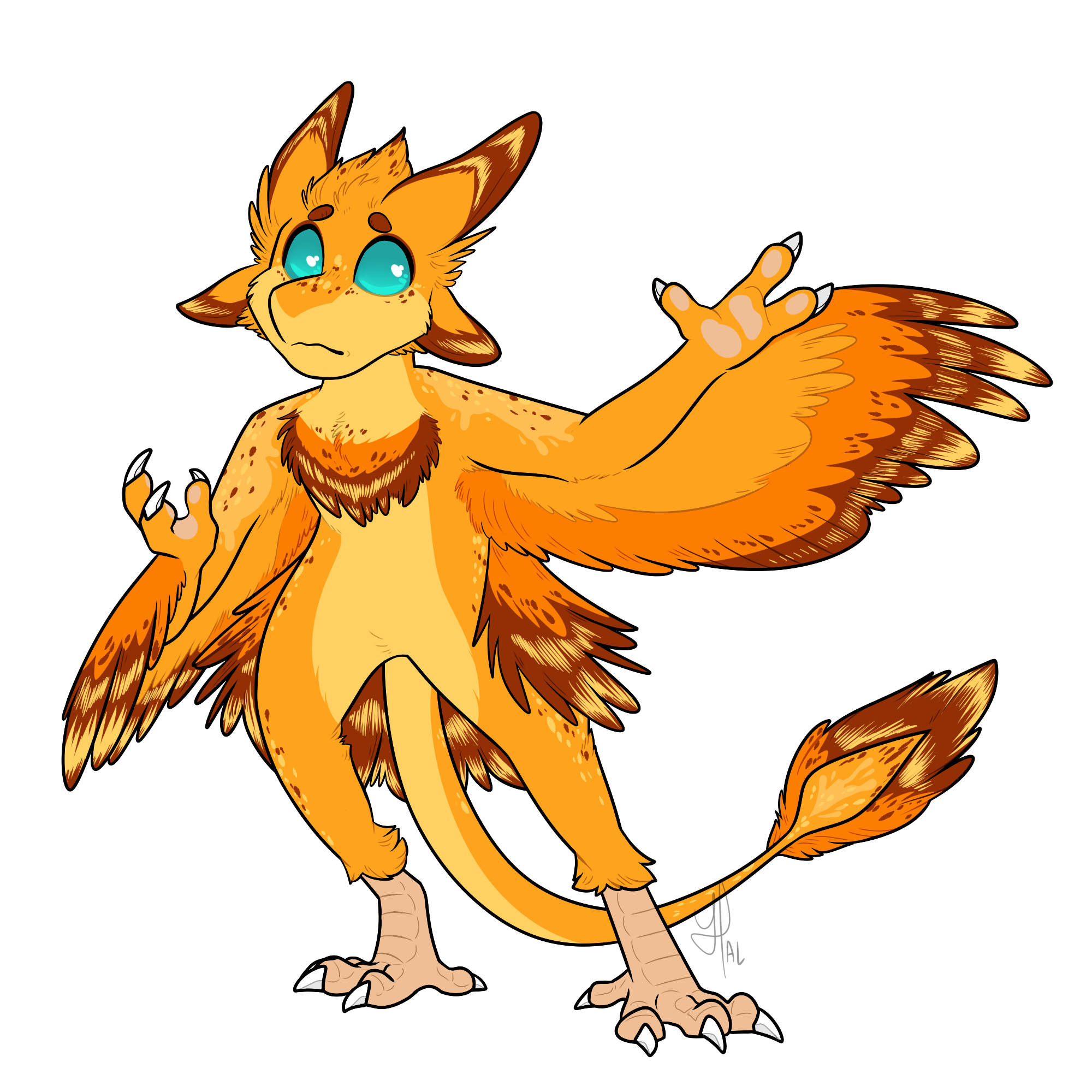 BACKSTORY
Pankaa was originally under a different name, one of which he doesn't remember but it was given to him from his Avali Tribe. His Tribe were a bit more on the traditional side of things, straying far from the military, weapons and technology, favouring the arts instead, music and dance especially. His Tribe on Avalon were known for their bright colours and patterns, especially in shades of cyan, which they often incorporated into their clothing and dances even. This peaceful way they had of living wouldn't last much longer after Pankaa was born though, as the Tribe found themselves raided for their valuables as well as a couple of youngins (Pankaa included) by another Tribe who had a more military and technology focus.

With this focus in mind, Pankaa and the others were subject to various tests so that this other Tribe wouldn't have to do so on their own children. They cared not for the effects it had on the other Avali to be taken from their homes in such a way. The golden boy was far too young to understand the full extent of what was going on, but he heard the phrase "heat prevention" mentioned enough to remember it. Unbeknownst to him, or to the full extent at least, this other Tribe was using him to try and achieve an official 'heat resistant' Avali. Their first destination to test him out would be that of Earth.

Reaching the planet that was scorching for his species, he found he was more resistant then his fellow Avali's now, but it wasn't nearly enough and he was soon struggling to battle against the soaring temperatures. They instead tried Plan B, a special suit made specifically for him, even having a mock of his Tribe's colours and patterns in the form of stripes down the side of the suit. This suit covered him from head to tail and while it did work for the most part one accidental tear in it was enough for the thieves to lose patience in the young Avali, as they headed back to their ship and back home to Avalon, he was left dumped away somewhere they hoped no one would find him in time... 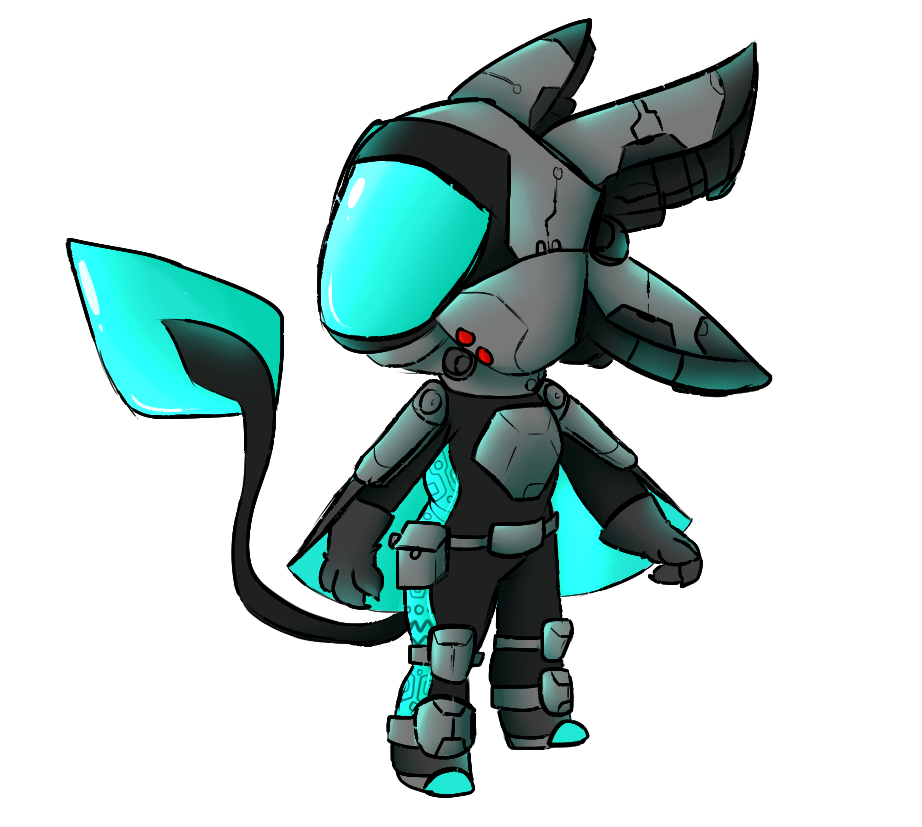 RAMPANT- Since separated from his Family Tribe, Pankaa finds it increasingly hard to process getting stronger and growing up, his current age adds to this difficulty. (Transformations 1, 3 and 4)

DURABILITY: Pankaa is hardened and strong enough to survive in the void of space. Tough as nails, he can reduce the damage of a taken attack by 33% once per thread.

REGENERATION: Thanks to all the testing done on the Avali from a young age, alongside a slight heat resistance he gained some regeneration abilities. Once per thread, Pankaa can heal 100% PL in damage and grow back lost limbs, as long taken damage is under 200% of his PL.

TECHNIQUES
OFFENSIVE TECHNIQUES:
[A1] Bubble Blast: Through the various experiments done on Pankaa when captured, he gained the ability to shoot pure energy from his body, this tends to come from his mouth in either a beam blast or a bubble orb which only does any damage once it bursts. Both the beams and bubbles are a glowing cyan in colour. Deals 33% of his current PL in damage.

[B1] Bubble Barrier: Through energy manipulation, Pankaa much like the bubble blast, can summon a barrier, similar in colour it tends to appear visually as a semi-transparent cyan ball and can even bounce. This protects him with power equal to 33% of his current PL. If an opposing technique beats the barrier, and Pankaa is within 60% of the attack's PL, the damage is halved. If Pankaa is lower than 60% of the incoming attack, the damage reduction is only 25%.

UTILITY TECHNIQUES:
[UT] Telekinesis: Another side effect of the testing and experiments done on the young Avali came in the form of gaining telekinetic abilities. Pankaa is able to lift and manipulate mostly objects with this ability but sometimes extending to people, given his age the ability currently is a bit random rather then on command and tends to only happen when he focuses his eyes on something or someone, or panics. His telekinesis forms a soft cyan glow around whatever or whomever is being manipulated by it.

Hey, Pankaa! Looks good enough to me. As this is an alt, reply here whether you'd like to move onto a BP or if you'll be skipping.

Sorry for not mentioning prior! But confirming as my third alt and will be skipping BP! Thank you Nashua

You'll be starting out with 1,600 XP, then! Go ahead and convert some to PL then you can get RPing!