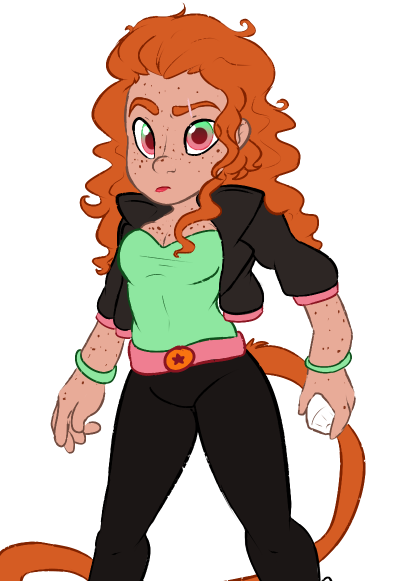 ABOUT
Zhalla is a rough n' tough sort of person, not one to really start any unneeded fights intentionally, but always one to finish them if need be. Family is who you make it to be to her, not just who is related to you by blood. A bit of a wild child, she isn't lacking in manners but also isn't known for having the best ones either. She enjoys many things most people would call reckless behavior or habits including that of street art and motorbike riding. Deep down she has a soft spot for kids especially ones who haven't been given a fair chance in life or have had a rough start to life.
While her work may seem questionable, she is almost always doing it to aid someone else. 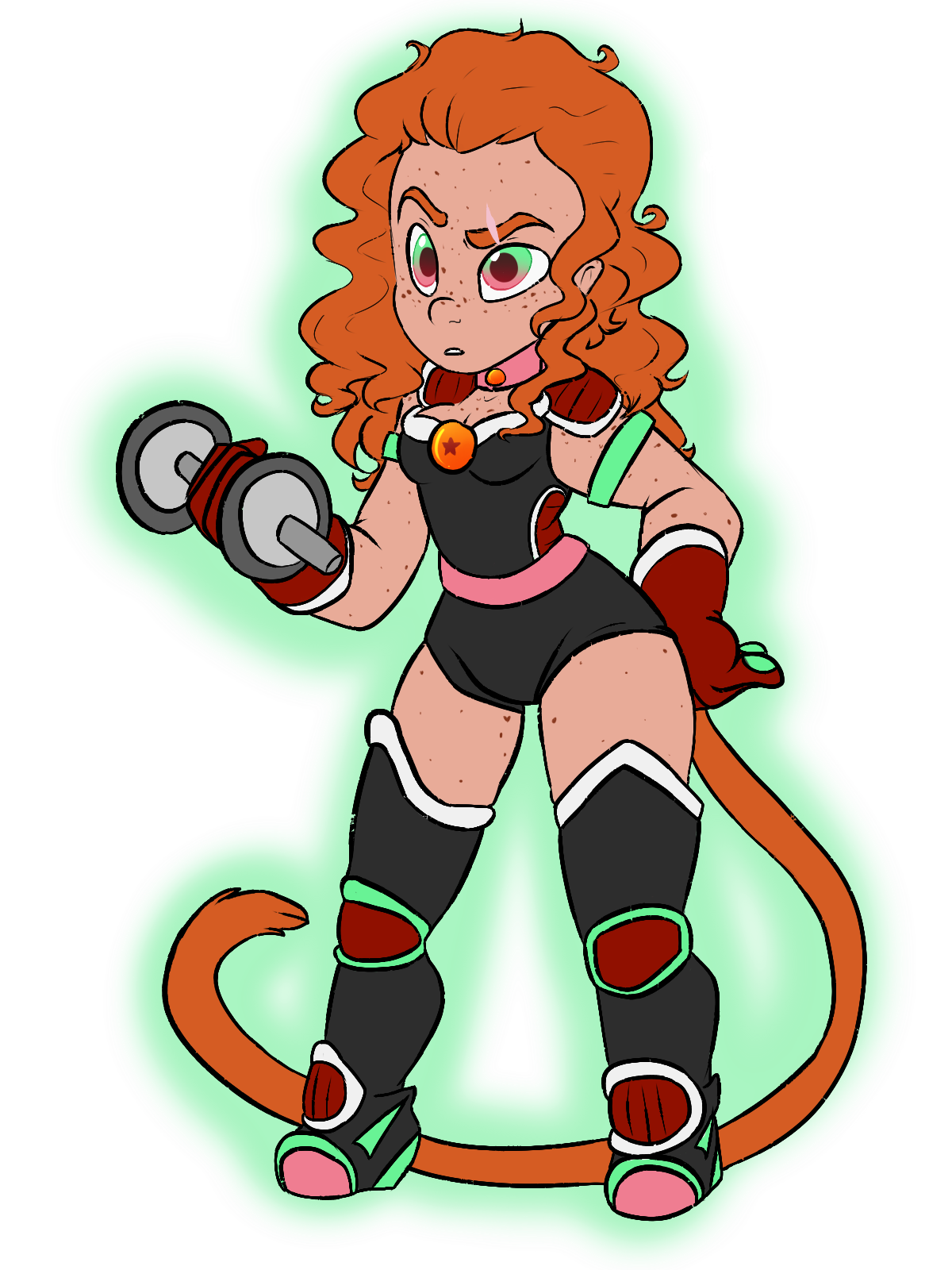 Art by Dingo
APPEARANCE
Standing at 6'8", Zhalla is a fit built Saiyan with medium to long curly amber orange hair with a matching coloured tail. She has green and pink blended eyes with a dark rim and a scar that goes over her left eyebrow. With tan skin and a body full of freckles, she tends to change outfits a fair bit when she can but one most noticeable one is her mercenary saiyan one, which is black in colour with red and pink padding along with white and green trims and ridges, high boots matching in colours as well as gloves. Aside from this outfit she commonly also wears motorbike outfits such as leather pants and jackets. Even when in formal she tends to always have a bit of a gruff look to her overall appearance and likes it that way.

BACKSTORY
Born to a Saiyan family on Vegeta, Zhalla didn't grow up in the best situation, often times she found herself either on her lonesome or in stressful home situations as a child, one earning her a scar over her left eyebrow. At age 11 though she decided she had, had enough and went on her own to seek out a new family. Sneaking out she found her way on a spacecraft, it's destination being Earth.
Earth was a new and exciting place for her, full of all sorts of good foods and kind people, she didn't find a perfect family but she did make a family. The family consisted more of street gang members who were kind enough to look out for her as she grew, teaching her important life lessons and skills she'd need as an adult.

When that time came, she found most of her new family disappeared and more young people started to turn up on the streets as she had once done. So in an effort to keep them all safe and offer the same sort of family to them as what had been offered to her at that age, she became a sort of street Peter Pan, looking out for all the lost kids as she attempted to find them each a place to call home while also making sure they were fed and had all of the basic needs. This proved difficult though especially when more kids turned up. So she started to look into mercenary work as it tended to pay well and was work she was often good at completing. Due to her rough start she wasn't beyond going that extra length to get more gritty work done when it came down to it.

Though she has a hatred for her Vegeta family she still does try to visit the planet sometimes, often in search of more work to help support the street kids. Continuing her mercenary work she hopes to find group work a bit more solid then one off gigs in good time.

TECHNIQUES
OFFENSIVE TECHNIQUES:
[A1] Boost Strike Zhalla channels her Ki through her body or through one of her Ki weapons in order to deliver a more devastating attack than usual. Deals 33% of her current PL in damage.

UTILITY TECHNIQUES:
[UT] Ki Armory Zhalla can create a range of various Ki based weapons, from knives to a full axe. These creations are semi transparent, they all match the colour of her aura and have a slight glow of their own.

SUPPORT TECHNIQUES:
Afterimage [SU1]: Through a sudden burst of speed Zhalla leaves behind a static image of herself to distract her opponents, this technique allows her to completely dodge techniques beneath 100% of her PL. This technique uses 1 KP in KP Battles.

Hello, Zhalla! Everything seems in order here, so consider yourself APPROVED! As per your BP skip, you'll be starting with 1,700 XP.