The impactful sounds of flying fists and whizzing blasts of Ki thundered around the Nitran, yet he remained still with his arms crossed. Faasta was deep in thought, mulling over the events that transpired within the Freeza Capital not too long ago. To think a lone Soldier from the Saiyan Kingdom could pose such a gigantic threat to the Fleet...It kindof scared him.
Faasta glanced around, briefly scanning the recruits he was currently in a training session with. Pitiful, all of them! Whereas the Saiyan Kingdom boasted Soldiers capable of leveling an entire City, these pathetic idiots couldn't even put a dent in some Combat Armor!
''Whoa, that blast was pretty impressive, Mayon!''
''Thanks, I've been training pretty hard.''
Faasta gripped his arms tightly, growling nearly uncontrollably as a glare shot to the recruits. They didn't seem to notice, however, and continued on their merry way. ''My power level's been shooting higher and higher, soon I'll be clobbering them monkeys left right and centah!'' The cocky Brenchian chuckled aloud, flexing his bicep. The Beri-Seijin beside him let out a curious hum, and scanned the Brenchian with his scouter. ''W-whoa dude, 3,000?! That's...!'' The Alien gasped.
3,000. This clown was bragging over a Battle Power of 3,000. And this other clown? He was impressed by a Battle Power of 3,000!
''WILL YOU TWO SSSHUT UP!?'' The Nitran finally snapped, a teeth-gritting snarl plastered on his face. The two recruits immediately froze and turned to the hulking Nitran, a nervous yet defiant look on their faces. ''W-whoa man, what's your deal?'' ''Yeah, the hell's your problem...?'' The two shouted back, already taking nervous steps backwards as they saw Faasta stomping toward them.
''Ohh, I have a Power Level of 3,000, bluh bluh bluh! I am ssssooo special and awesome!'' Faasta mocked the Brenchian's tone. ''Do you have any idea how ridiculousss you sssound?! Did you forget what happened here the last time the Ssssaiyans attacked!?'' The Assault Trooper looked down on the shorter Brenchian, jabbing a finger against his chest and pushing him backward.
''What, we can't joke around? Who the fuck pissed in yer cereal, mate?'' Mayon dug a foot into the ground, and stood tall against Faasta. Standing further back, the Beri-Seijin already had his scouter fixated on Faasta, and he quickly began to choke on his spit. ''M-Mayon, I d-don't think you wanna mess with this g-guy! His Power level is over...-!'' Mayon quickly interjected, ''I don't bloody care, I'll beat his red ass any day of the week!''
Faasta took a deep breath as the Brenchian began to get more and more riled up. He sighed out, and shook his head.
''Are you mocking me?! I'll show you, snake! HUAAA!!''
''Yeah yeah, whatever, 'mate'.''
Just before the Brenchian could attack with a mighty swing, Faasta jabbed outward with a quick punch to Mayon's chest. While his motions were loose and casual, the impact of his punch shook the entire floor. Mayon was sent flying at a breakneck speed, a fizzled blur of blue that quickly crashed into the adjacent wall, leaving a huge brenchian-shaped dent within it.
Everything was silent. All eyes were locked on Faasta, mouths wide open in utter shock. Not even a peep came from Mayon.
''Any other takersss?!'' Faasta shouted out, turning to scan the recruits that were gawking at him. ''No?! Then ssstop ssstaring at me!''
The Nitran sighed, pinching the bridge of his nose. ''God, I hate all of you...!''
Faasta's PL: 14,000
Relevant Items: Ruby Pendant
@hyoza | Branch | Nippy | Gabu
Last Edit: Apr 4, 2019 18:21:32 GMT -6 by Faasta: Tagged the other Psycho Bois
Faasta - WTF Assault Trooper 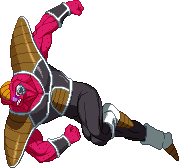 In the shadow of a pillar a tail whipped lightly and then curled back up, an arcosian hidden in the dark watched a big red boastful soldier made a point. They were completely immersed in the shade but they would soon step forward as the wall nearby got a whole new look to it. It was then their wide smile was revealed with two large buck teeth jutting out from the plump arcosian lips. Nippy was admittedly impressed, this Faasta was rather strong after all, much more impressive than any of the other cannon fodder here. It was no wonder that the rest of the soldiers were shocked by the display of malice.

Nippy was here scouting potential allies, those whose abilities could be useful to the arcosian. They needed strong able bodied "friends" if they were going to end Bitter and Crisp's existence when the time came. Though Nippy knew who his preferred target was, Warmaster Aizu, a strong up and comer who would be needing his own loyal soldiers soon enough. No one can raise high in a society like this all alone, you need someone to keep an eye on that big strong back. The red skinned snake man that was thrashing that brenchian was a tempting friend to be, and maybe it was time to introduce themselves.

Leaning on the pillar had taken up enough time, the pink lizard like alien deciding to step forward and with a giggle they approached the red skinned and obviously red blooded alien. “Oh my that was so impressive big red!” they spoke said with a cutesy tone, like bubblegum “You could have giving us a whole new window if you punched him a little harder don’t you think?” Nippy’s red eyes, bright and big looked Faasta over obviously before the shorter creature stuck out a dainty hand in a black glove. It could be taken for a handshake or maybe you were supposed to kiss the imaginary jewels on their fingers, it was hard to say.

“It’s quite nice to meet you, such a strapping and dangerous fellow that you are. My name is Nippy, Corporal Nippy, a child of Baron Heimal.”
Nippy's PL: 1,625

It had been only a few days since Branch joined up with the World Trade Federation. He thought he might have finally lost his mind. These were the same people that had allowed those damn space pirates to ransack his village all those years ago. However, there was something bigger at play here than just pitiful ideas of pride and dignity: Money. There was no way that Branch would be able to track down his old crewmates without a sum of credits in his pockets. Branch had only been to Arcose a couple of times, as he worked under the very crew that kidnapped him. He was familiar with the way they did things around here, but he never dreamed of becoming a scrubby soldier.

But there he was, training with less-than-average aptitude. His usual routines consisted of punching trees and rocks in the wilderness, but never so regulated as their routines here. He was busy practicing his jabs as he overheard the cheery conversation between the Brenchian and Beri-Seijin near him. He ignored them, thinking they were too chipper to be soldiers in training. That is until the hulk of a red blur practically split the sweaty air with a shout. He called the two out and put them in their place, quite literally. As the Brenchian was smashed into a wall, Branch chuckled to himself. He folded his arms and looked around the training area. It didn't seem like anyone would be challenging the red Nitran. Usually, Branch would jump at the chance for a fist-fight, but he was not very fond of the idea of joining Mayon in becoming a wall pancake. So, instead, he just looked on and scoffed. The Namekian's boredom was pretty apparent.

"I guess he was more bark than bite." Branch comments, looking back towards the two recruits.

Gabu was the next to arrive on scene and based on his demeanor and the uniform that he currently wore which was all red fleet gear, he looked around with a puzzled stare. His arms rested behind his back and he looked around the area in idle for a brief moment, taking in the scenery as he recalled the events that he had heard and shaking his head in disbelief of it all. How could one individual take on so many soldiers one after another. However it was quite obvious that he didn't even have to utter a word. The best soldiers, the strongest of the ranked members are out there on the field fighting everyday, while the rest of the fleet are here protecting it. They aren't the best that the fleet has to offer and even though there are more fleet members gathered on the planet, they never had to worry about an invasion from others. However, it only took one strong member to take them down.

Gabu made his entrance known by calmly walking into the scenery that just transpired and immediately walking past the member known as Faasta.

"Rain will always make noise but at the end of the day it can't harm you. Lighting is the true enemy that puts fear into others that don't see it. Good work putting that brenchian in his place. Its people like that, that die at such a young age."

Gabu looked up at the now towering Faasta and gave him a brief nod as he looked over at the arcosian.

He then shifted his eyes towards the namekian fellow.

"Strong and sturdy you are. We don't get much namekians in the fleet. Make your race proud and serve the fleet well."

Then Gabu made his way to the top of a ruin building ledge and sitting on the edge of it as he waited for anyone else to show up. He sat there in idle, just sighing to himself in disbelief that the fleets numbers were dropped drastically.