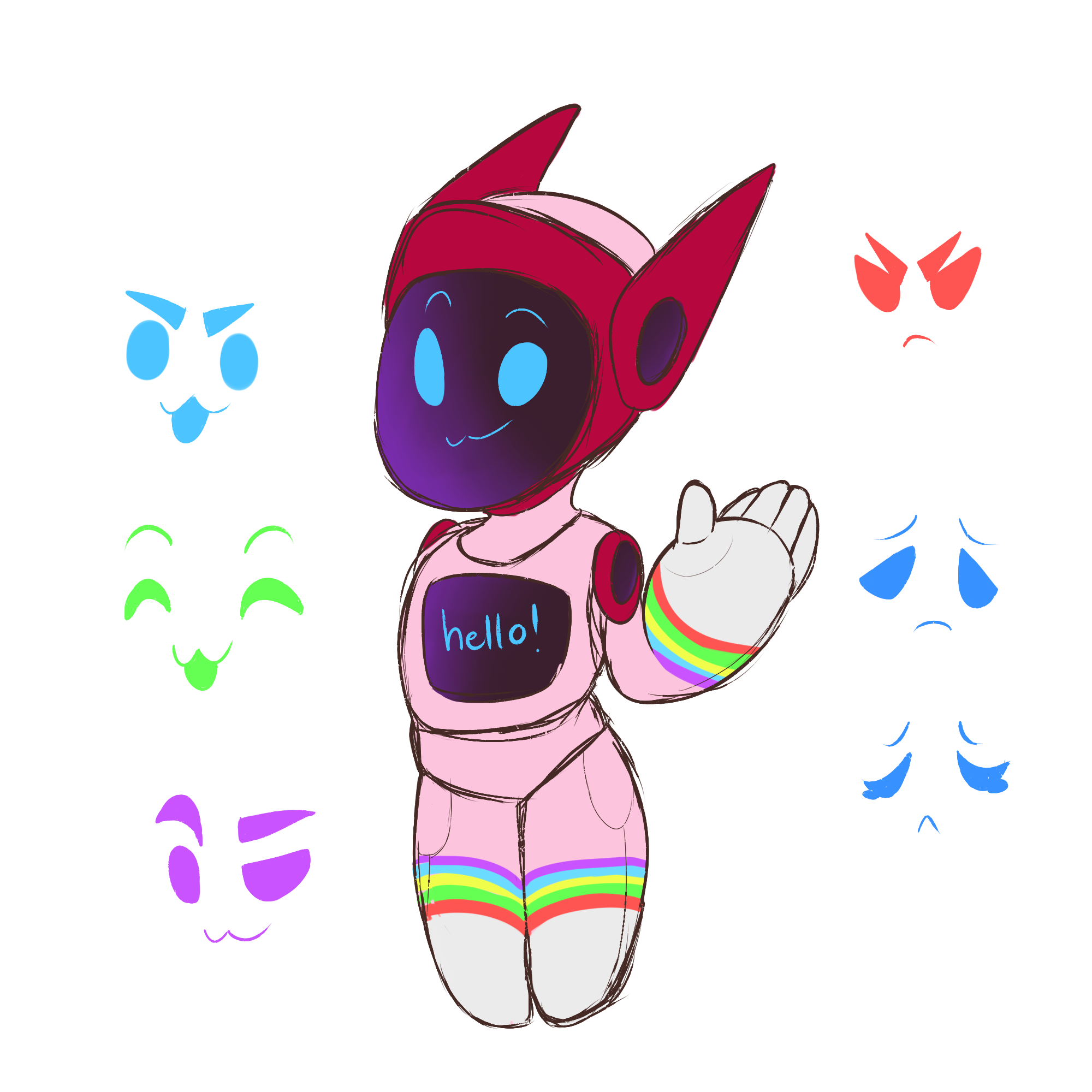 ABOUT
Care is an android made to help beginner parents and guardians at looking after their children, from teaching them basic skills, early schooling subjects and helpful tips and tricks here and there as well as helping children with daily tasks, this android is almost like an older sibling or friend who looks out for a child whenever it's needed. Able to transform shape and change colours and patterns to suit whatever their designated child finds the most friendly, this android has two core base designs though, one more humanoid while the other is more animal-like in appearance. This is so it's easier to pack away if need be, as well as being easier to carry if shut down, while the more humanoid appearance is the best mode for looking after a child. It's face can change colour and expressions depending on mood and responses, red faces meaning anger, deep blue being sad while bright blue and green are cheerful and happy. The screen it has on it's chest is both for activities for the child in its care while also doubling as a face cam and camera in general for the parent or guardian of the child, who can call through the robot at any time.

APPEARANCE
Mainly, C.R.G.V.R appears as a two legged "humanoid" robot with a screen for a face, with stubby rounded arms and fingers as well as a screen on its chest, its colours range from many schemes and pattern choices but are usually based on foods or children's toys so that they appear more friendly to a designated child, some even taking on a specific palette that the child relates to personally as well as a design. While being a robot their exterior is actually mostly soft, especially the hands and legs, feeling more like a puffy marshmallow unless formed to be otherwise in more dangerous situations. The TV tummy can express words for communication and also act as a learning tool or a tool for the parent or guardian to contact the child through. The screen face will display multiple kinds of faces using different colours to express emotions as this also helps the child to learn about said emotions. Aside from this humanoid state it may also shift into the form of a more animal-like state as well like that of a dog.

HISTORY
Babysitting and caretaker robots are nothing new, in fact there have been many, many models throughout the years but the C.R.G.V.R is one that was modelled in the last few years or so, when exactly is not quite known, but it is part of a bigger line of C.A.R.E bots. What IS known is that there are a few models across Earth but no two look exactly the same either design or colour wise. Aside from the fact that there are a few on Earth the technology behind these androids is known for being Avali made and most of the ones that ended up on Earth were mostly because of either Technology showcase markets that would sell a few while there, or because of nomad Avali Merchants who travel between the two planets and sell them on Earth for profit. The numbers on Earth by no means compare to that of Avalon but are steadily growing in numbers due to the success of the overall model.

This model in particular was one brought from Avalon to Earth by a small Avali group for a Technology Showcase in Central City, which Nero came across after coming home from work one day. With a little Avali at home by the name of Pankaa, the Saiyan thought it best to get the kid both something from his kind to hang out with, plus a second guardian of sorts so that Pankaa could go outside with appropriate supervision more often. In the end Nero was even more convinced to get this model of android for Pankaa as it also had a "life source" and lifelike motion to it in general, which would help the young Avali warm up to it like any other person.

Once taken home Care freaked Pankaa out at first but steadily he became more used to it and thought it was rather hilarious how it took on the colours of one of his favourite characters from a children's show about teddy bears. Still occasionally creeped out or unsettled by the robot, the Avali works to befriend it still while the android does its best to look out for the curious boy and do its best to keep him safe and happy.

TRAITS:
MAXIMUM OVERDRIVE: Care pushes themselves to their absolute limits in battle, increasing any Overdrive-added modifiers by +x1. However, using this ups the Overdrive XP toll from 1,000 to 2,000

SUPER ANDROID: LOCKED Up to three Android character can combine their power to become a single, more powerful Android. The strongest Android adds 66% of the weaker Android's Base PL's to its own as well with their associated techniques.

OFFENSIVE:
iShield [B1]: Programmed with a defensive system in case the child they are looking after finds themselves in danger, Care has the ability to summon a physical holographic barrier. This protects Care with power equal to 33% of their current PL. If an opposing technique beats this barrier, and the barrier user is within 60% of the attack's PL, the damage is halved. If the barrier user is lower then 60% of the incoming attack, the damage reduction is only 25%

SUPPORT:
Digi Comms [UT1]: Similar to Telepathy, this allows the android to communicate with those they are familiar with across the planet they are currently on via digital transmission, this can be hung up on or ignored by those who do not want to hear the android. This technique uses 0 KP in a KP Battle

UTILITY:
Energy Sensing [UT]: Through digital methods, Care is capable of feeling the natural energy of living beings, they have an understanding of the Power Level of other non-android creatures and can feel the power of the attacks they are using compared to their own. This technique is Passive not requiring activation and uses 0 KP in a KP Battle, Energy Sensing does not work on Androids.

Looks good to me- you're APPROVED to use this minion!