Several weeks had passed since his initial arrival to the Space Station Knutts. Gabu was being Gabu like usual, drinking, partying, and enjoying his time at the station. Which lead to medic visits from the doctor of the station and for someone who was now borderline alcoholic and a cigarette smoker, the regular doctor who had treated Gabu for alcohol poisoning night after night, he'd look at Gabu's charts and based on the charts alone, it didn't look good. Gabu laid on his bed with an IV on his arm and a hospital gown. Beside him, was a bottle of vodka which was always kept half full. He'd reach for it, until those doors opened and he dropped his arm to his side. The doctor looked worried, and with squinted eyes, looking over his chart with a facial expression and the thoughts of finding the words to tell Gabu on what was going on.

"Mister Gabu, you have come here every night, worst than the previous. The first night you came here, you agreed for a lab report on your entire body. A check up if you will. You probably don't remember any of it since you were passed out drunk."

Gabu lifted himself up more from his bed and stared at the doctor.

"What is it Doc? just bad liver right?"

The doctor didn't stare into his eyes like Gabu wanted him to, to ensure him that that was the case indeed. The doctor briefly sighed to himself and approached Gabu and getting into head level with him as he sat in his office chair.

"I'm afraid, you are going to need a new liver. Also, I hate to say this but. If you keep drinking the way you are now. You are going to have cancer."

Gabu calmly folded his hands together, his body shaking abruptly by this news alone.

"I have the money to pay for all this."

The doctor shook his head.

"It won't be necessary, its on the house considering that we are working together now. If you don't mind me asking, why do you drink and smoke?"

Gabu stared at the doctor and sighed heavily.

"From what I have seen Doc and as a mercenary, my job has always been stressing me a lot. That is why I drink and smoke."

The doctor flipped over the clipboard charts and looked at Gabu.

"Perhaps go into a different profession. What about Medical?"

Gabu chuckled as he briefly looked away at the window frame that showed space all around them.

"Not my line of work. You see, I was a mechanic before this. Fixing ships, a man's leg."

The doctor smirked and placing the clipboard on the table.

"What about helping me create androids?"

Gabu then turned to look at the doctor.

"Yes but I would have to read some books and it would just take too long."

The doctor chuckled and shook his head.

"I can train you. But you will have to put in the work Gabu."

Gabu looked at him strangely.

"But it would take long."

The doctor patted Gabu's head and placing his hands on his lab coat.

"If you pass the test, then you won't need to wait long and plus I will be the one training you. So what do you say?"

Gabu stared at the man with determination.

A few weeks had gone by, reading book after book, picking up the knowledge relatively fast. He went with the basics of anatomy , biology, the whole works. Along the way, his doctor friend had aided him and explained to him with the things meant in the book and how it applied to everyday life. The two worked diligently. 22 hours a day, with two hours of sleep, and lots of coffee to help. He had passed his studying, his test, and finally, he became the assistant of the doctor. Helping him work on projects such as creating formulas and typical mixtures that one would find in a lab. To the point where Gabu was even trusted enough to even make his own theories. The doctor needed a new assistant and that came from Gabu.

Gabu was now helping the Doctor, with creating android bodies for the new faction that was made. They needed the man power and they had the resources for it. These android bodies were just in the first stage of creating the life, the stage where they are just schematics and blueprints alone. The doctor would briefly leave the lab, allowing Gabu to do the work on his own. Drinking his cup of coffee and staying busy, looking like a man who hasn't seen sleep in weeks. But all of it was worth it, considering that he has now a second chance at life with a new liver and a new opportunity before him. The screen showed space, stars and all, with the screen moving ever so slightly...with one able to see a small dot begin to grow...and then suddenly go right at the screen itself, the screen shifted, showing the space station Knutts, and a Pod heading right towards it. Inside Space Station knutts, the pod opened and out came Terium who's powerlevel was, of course, suppressed so as to hide himself as usual. He just needed to find a lab...social interaction sadly isn't really his thing, so he quietly just slipped out of sight, and hid in the vents as he normally does, deciding to explore the station that way. it's quite the interesting area to say the least.
"These...'heroes' do have much to protect don't they? Good thing I'm not so restricted." 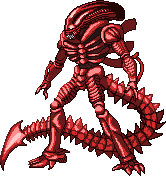 "Experiment 01, is the first android I have created. So far, the LOG has stated that the functions is good. Now I just need to flick the switch and he will come alive."

Gabu holding his tape recorder with his left hand and with his right, he'd press down on the wedged lever, causing the liquid from within the pod to drain down the chemical liquids from within Upon opening the android explodes. Black smoke exits the pod and smog appears on Gabu's face as he coughs a bit to himself.

Gabu briefly pacing back and forward, as he drinks his coffee, checking the LOG once again. He overlooked something critical and critical indeed. The next page of the LOG was a mystery to him and upon going to the next page. It was filled with 30 x marks on other things that he didn't do properly. He grunted in frustration and finally collapse to his back. How could he have not checked the next page!

Terium ends up detecting the energy signature of Gabu, and followed it, curious as to who it was. Eventually, his senses had found that it led to a lab! If he can manage to convince whoever was inside the let him work there then he'd be able to truly begin his plans, which would be great! So Terium connected his mind to Gabu's and began communication. 'Greetings, I have been in search of a lab for some time now and noticed your energy signature. I...am Terium, might I ask as to your identity?' he telepathically asked Gabu, deciding that he should probably know who could possibly be a future asset to his plans. Of course he's not left the vents yet, and plans to inform him of where he shall be coming out of after getting Gabu's name.
Last Edit: Oct 12, 2019 20:29:09 GMT -6 by Terium: small edit
"These...'heroes' do have much to protect don't they? Good thing I'm not so restricted."