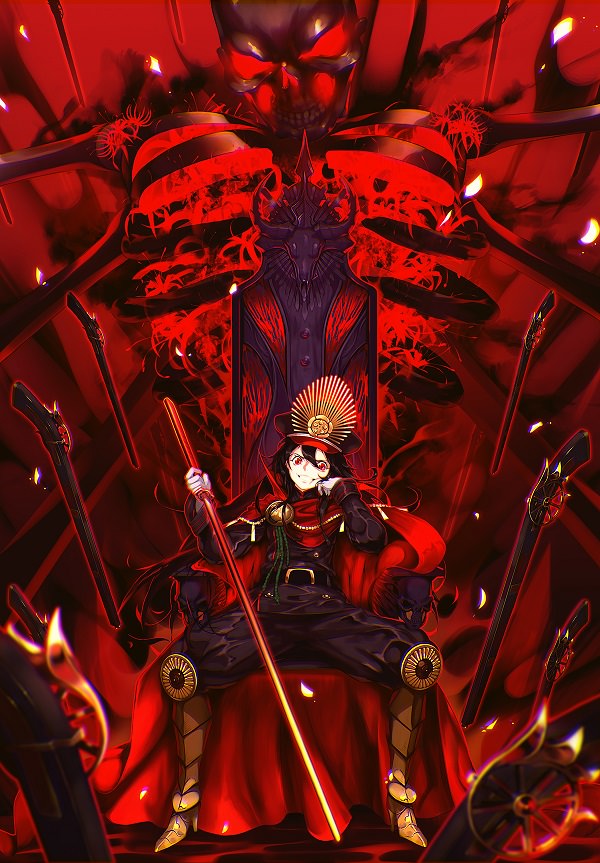 Colonel Crimson stands at 5'8, favours her ridiculous miltaristic uniform, and has blood red eyes which have lead to scurrilous rumours that she has demonic ancestry. What a ridiculous notion!

There are some people in this world who simply cannot be happy being second best.

The woman now referred to by some as Colonel Crimson is one such woman.

What is the history of a great dictator? Surely, the universe has seen countless of them in the past, and their backgrounds are as many and varied as their techniques. For the young Tobaka, there was little that could have foreshadowed her eventual rise as a force to be reckoned with. She was one of many children in a small village nestled in the sleepy East of the planet Earth. Her father was a doctor, her mother a university lecturer who had retired to raise her beloved children.

Tobaka was always just driven to be more than this. She read history, devoured old legends hungrily, and always seemed to be looking towards something greater than herself. When she was just twelve years old, she left on her first attempt to find the Dragon Balls; those orbs of legendary power which could pave the way to her own greatness.

She failed, of course, but the journey – long and arduous as it was – forged the girl in the fire of combat. She learned how to manipulate her energy, not as most do, but in desperation to avoid being crushed by a landside in the distant north. She fed on the flesh of dinosaurs, and clashed with bloody intent against warriors far more learned and experienced than she.

When she returned, empty-handed, to her village, it was with a fire in her heart and a new vision blazing in her soul. The world had been disparate and broken for too long! It was time for someone to rise up and lead humanity as a single whole! The galaxy was out there, and nobody was doing anything with it! How could mankind’s eyes have turned inwards so soon after the disappearance of Vi-Poi? How could they have let themselves become so small?

Her fiery rhetoric won her many supporters in her little village, but it hid a darker truth. Tobaka wanted to unify the world, yes, and she wanted to lead humanity to the stars, of course… but she wanted all of this as a means to an end. She wanted power. She wanted the Dragon Balls. She wanted eternal life and a planet yoked to her service; she wanted all the riches of the universe and strength enough to make the Gods tremble.

Her greatest asset in this was not her own personal strength, though she was far stronger than the average human. Her greatest asset was her charisma; her ability to read people, and make them want to follow her.

It was with that ineffable power that her tiny village became the first stepping stone in her grand design. Unified under her iron fist, the first base camp for The Scarlet Brigade was born. She has marshalled her forces, small though they may be right now, she dreams of the day they will be bigger. She dreams of the day she will have her Dragon Balls, and the power they can grant.

Now, she seeks to step forth onto the stage of an Earth which is already in a time of tumultuous change, and offer a path back to stability.

A path of unity.

A path to peace.

TECHNIQUES: Three normal slots unless stated otherwise (*NOT SIGNATURES). Some species start out with 4-5 techniques.

[N1] Destruction Knuckle: Colonel Crimson channels power into her fist, which glows bright red. At the point of impact, the energy is released in a brilliant explosion.

[UP2] Obliteration Knuckle: A more powerful version of Destruction Knuckle; Colonel Crimson’s fist glows from red to orange before she punches the foe, and the explosion is much larger. It never seems to hurt her though.

[SU1] Calculated Motion: The Colonel has a very flashy style of combat. Though it is just as draining as the Afterimage Technique, this ‘calculated motion’ technique allows the Colonel to avoid an attack by the barest possible margin, augmenting her speed and reflexes just enough to avoid the technique. At this level, the technique avoids an attack equal to 100% of her power level. 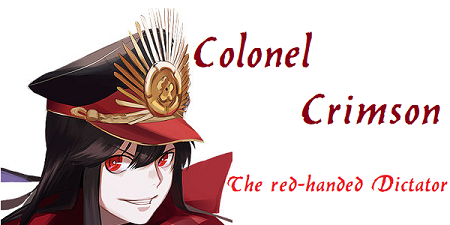 You're good to go, I think. Move on to your BP!