10,000 PL
Under the cover of night, Didi snuck into the vacant tournament grounds with two specifics goals in mind. The first of which was innocent in nature, he wanted to practice a few of the spells that he'd recently discovered. With some of them being more offensive than playful, Didi figured the Tenka'ichi Budokai grounds would be a safe place to test them out at. The young Majin didn't want a repeat of the Bamboo Forest incident. Turning an entire section of the forest into candy had taught him to be more careful where he practiced his magic. Well, that and to not cast spells that were clearly above his current level of magical prowess.

Didi's second and far more mischievous objective required two dozen rolls of toilet paper and a can of spray paint. He had 'borrowed' the toilet paper and spray paint from a local supermarket on his way over to the arena. Now that he was here, a bag full of supplies in his hand and his target in front of him, he wasted no time in getting to work. Dashing about above the arena and laughing wildly, Didi covered the ground below him in lines of toilet paper as he moved. When one roll would finish, he'd discard the leftover piece of cardboard and reach inside the bag for another.

Finished with his last roll of toilet paper and with the Tenka'ichi Budokai now looking like it had been carpet-bombed by some kind of TP Fighter Jet. Didi made his way down to the large length of wall next to the arena's front entrance. "Now let's see..." he mused as he shook the purple can of spray paint up and down in his hand. He wasn't sure what he wanted to tag the wall. Didi knew it shouldn't be anything too time-consuming to work on. Anything he spray-painted was just going to be washed off in a few days after all. "Heehee! I got it, I know what to do!" exclaimed Didi excitedly. He gave the can one last good shake and then went to work on tagging the wall with his artwork.

"And done! with a childish smile on his face, Didi tossed the can of spray paint aside and stepped back to admire his artwork. 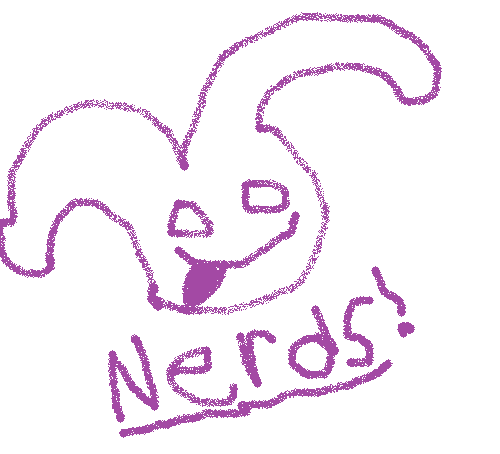 The drawing was an amateur and cartoonish depiction of Didi's head with his tongue sticking out. Directly underneath the artwork was the word 'NERDS!', which he made sure to underline for extra empathize. Happy with his work, the young Majin moved onto the part of his plan that didn't involve being a menace. Flying back to the arena, Didi landed on the tournament stage and took a deep breath. It was time to get serious. He reached into his pocket and fumbled around for what he was looking for. Didi would eventually pull out a red Jolly Rancher. There was nothing particularly special or noteworthy about it - other than its wrapper being a bit worn.

Freeing the hard candy from its wrapper and holding it between his thumb and pointer finger. The young Majin would focus his energy, the ruby necklace dangling from his neck starting to glow. Didi could feel his strength slowly slipping away from him and into the Jolly Rancher, which had begun to admit a faint light. Afraid to wait any longer, Did tossed the candy into the air. "Take shape my Munchy Marauder!" in conjunction with his words, the Jolly Rancher began to grow. As its size increased, the shape of the Jolly Rancher quickly began to change as well. Within in moments the once rectangular piece of candy had assumed a humanoid form whose appearance mirrored Didi's own.

The candy golem landed on the ground with a thud and turned to face it's master. It didn't say a word, only staring at Didi with emotionless eyes as it await a command. Not that Didi realized that's what it was waiting on. "Holy crap that actually worked!" he shouted excitedly and wide eyed. "I mean..." he cleared his throat, "Of course it worked, I am a master magician after all." he approached the golem.

"That said - I wonder why it took on my appearance?" did it maybe have something to do with how he felt so weak when casting the spell? "I still don't feel like I'm at a hundred percent though, more like fifty percent. Does that mean half of my strength went into you?" the marauder gave no reply. Didi frowned, "Not very talkative are you?" that was a little disappointing. The Majin shrugged, "Oh well, I'll figure out that details later! For now what do you say the two of us spar a little bit? I wanna see how durable you are." without missing a beat the candy golem attacked. It's fist smashed against Didi's face and sent him reeling towards the ground.

The energetic youth was quick to recover, however, and moved to launch an attack of his own against his creation. Didi and his Munchy Marauder would continue to exchange blows, loudly, entirely unaware that they might not be alone anymore.

[UT1] Munchy Marauders [MULTI-FORM]
A magical technique that transfers half of Didi's power into a piece of hard candy which then transform into a copy of him. Candy-Didi is then capable of thinking and acting entirely on its own. To cancel the technique Didi merely needs to reabsorb the energy used to perform it, which can only be done while not under attack.

A thought had settled within Kamui's mind, one that didn't particularly please her.

Ever since she hijacked that Ogre Taxi and escaped the boredom of Otherworld, Kamui thought that she'd get everything she'd have ever dreamed of on Earth. Tons of excitement, heroes and villains everywhere, and plenty of people to fight! Instead what she found were traffic jams and shitty street musicians. It was pretty disappointing, really.

But Kamui didn't give up! For if the West disappointed her, the East would surely excite her! And if that wouldn't do the trick, she'd just head South, exactly as she was doing right now!

It had to be a mistake, right? Surely Earth wasn't actually this boring, despite all the new stuff she came to learn. She was just looking in the wrong places! This hunch was only confirmed when Kamui came to learn of the 'Tenka'ichi Budokai Grounds!' A place where an annual martial arts tournament was held for the strongest fighter on the planet, but also a place where fighters could meet and spar against eachother!

THAT is what she was looking for! It was a dream come true!

Eventually she had found the place. From high above, Kamui could see rows of seats surrounding an open stone platform in the middle. Yet something looked...Off. Streaks of white that seemed to criss-cross around the entire tournament grounds, almost like a spider's web! ''...That's weird. Janitor outta town?'' Kamui scratched her head. She looked closer, and spotted a tiny thing moving around in the arena. Sensed it, too!

Curious, Kamui descended down toward the large gate leading into the arena, and stood atop it. From here, she could see everything clearly. Toilet paper scattered around, graffiti'd walls...Everything was starting to become clear to her.

''Hey, you there!'' Her voice boomed across the arena in an authorative tone.

She leapt down to face the weird, purple guy and his awfully shiny hard-looking friend. A stern glare settled into her eyes as she looked at the two, hands on her hips whilst she shook her head, almost like an angry mother scolding her son.

''Come on kid, that's not how you TP a place! You gotta put some thought into it!'' Kamui spoke with clear disappointment, gesturing around her with a displeased pout. ''First time?'' She looked back to the Majin with a cocksure, cheeky grin. Kamui had TP'd plenty of places in her early days, and considered herself quite the artist.

She pointed at the Graffiti, and nodded. ''I do like that though, nice addition!'' Even the master wasn't aversed to complimenting a newbie.

Back to the matter at hand, though. Kamui realized she probably shouldn't be endorsing this behaviour if she ever wanted to become a hero. She had to discard her childhood sentiment, and put this little rascal in his place.

''Anyway, fun's over buddy. I can't let you make this place all dirty.'' Kamui held her chin high, speaking confidently. ''I'm afraid I'm gonna have to ask you to clean this up!''

She looked down at the purple kid with an authorative glare. For some reason, she felt as if this wasn't going to be as easy as she hoped...

10,000 PL
The battle raging between Didi and his candy concoction was a climatic one. Something to be written about in history books as the most epic clash between Majin and candy that had ever been. Or at least it would have been had Didi known anything about fighting before playing fisticuffs with the magical golem. In reality, the fight was nothing more than the two taking turns punching each other repeatedly. It was hardly the most impressive display of martial arts that had graced the grounds of the Tenkaichi Budokai. None of that matter to Didi though, as far as he was concerned, he was having a battle of world-ending proportions.

That up until he was rudely interrupted by someone that wanted to put a stop to his fun. He was mid-punch when Kamui's voice boomed from above and it caused a wave of panic to wash over him. "Crap, crap, crap!" he thought, immediately stopping his attack and turning to face the ogre as she dropped from the sky. He was so screwed. Didi was sure that the place was supposed to be closed for the next few days. It was just his luck that he'd be wrong and someone would actually be here.

Didi cocked his head to the side, his clone mimicking his movements and confusion spreading across his face as Kamui continued to speak. "Huh?" so she wasn't here to bust him and just wanted to tell him how bad of a job he'd done TPing the place? If that was the case what a relief! He wouldn't have to face whatever the punishment was for defacing such an important place. "No, this isn't my first time." he answered, narrowing his eyes suspiciously at the ogre. "Heehee, glad you like the art! It's my magaum optis." Didi smiled proudly.

That smile quickly faded, however, when it became clear that Kamui wasn't here to critic his work. "Damn it. I shoulda known a cool adult was too good to be true." he sighed and got ready to bolt. "I don't blame ya for not knowing this Red but I'm super allergic to cleaning." he looked to his golem, "Right Cidi?" candy Didi nodded his head. "So even if I wanted to stick around and clean this place up I can't. The moment I touch a broom or start cleaning my whole body turns to goop." maybe she wouldn't be able to tell he was lying. But just in case, "Look I'll show you." Didi bent down to pick up a piece of toilet paper near his foot. When his hand touched it he turned his body into a puddle. The purple pile of goop that was now Didi hit the ground with a splat and stayed that way for several seconds before reforming.