Remnants is currently hosting an event!
View our event trailer below. 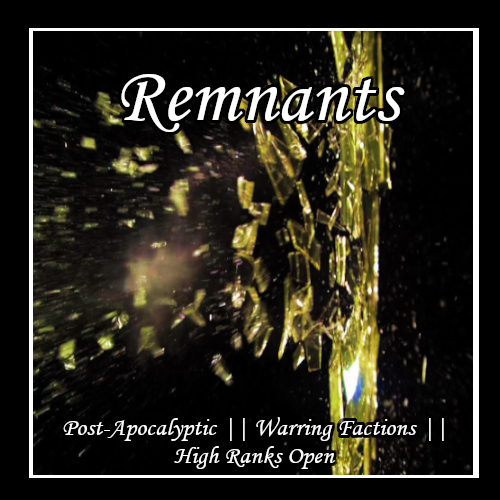 ☾ A forum roleplay with character-driven politics, IC leadership opportunities, and group creation
☾ Six different factions, all with their own homes, ranks, and abilities
☾ The plot is driven by the players, and includes various events
☾ Only a short character sheet is needed to play!
☾ A vibrant environment set in Seattle, molded by the players
♦ ♦ ♦
At first, they called them the undead, but everyone knew the truth, long before the newspapers printed it. The dead were not rising, no, the living were falling. Leaders, saints, and parents alike had their minds destroyed, and their bodies ripped apart by boils.
They were not humans, no, but they weren't quite animals either. They cared about one thing, and one thing only: Meat. The meat of children.
The disease tore apart the horribly fragile world. It spread like wildfire, and the Earth was knocked from its very foundations. It only took a month. A month, and human civilization, from Iceland to Thailand to Peru, was no more.
But not all was lost. Not yet.
"The kids, they're all that's left. Pray for them. Please, just pray."
It was the last headline printed, before the journalists who had written it tore each other apart, limb from limb.
The disease destroyed the minds and bodies of everyone on the planet—almost. Despite its utter cruelty, it passed over the children. Anyone of less than 16 years, they suffered not even the slightest cough. No, their suffering was greater, as they watched their parents, teachers, and siblings turn into horrid beasts, with blood staining their teeth.
♦ ♦ ♦
Remnants is a literate forum roleplay set in 2021, after a pandemic known as The Outbreak wiped out 90% of life on Earth. Now, a year has passed, and the world has been flipped around.
Those who turn sixteen do not grow sick. The disease seems to have sated its hunger. Now, those who survived have been left to pick up the pieces. They are the Remnants.
Remnants takes place in Western Seattle, where several groups of kids have carved out their own ways of life. From the Space Needle, the City Council watches with an air of disapproval, while The Legion fights amongst themselves, tooth and nail, to raise their own rank in the pecking order. Meanwhile, the Pacifics are divided between science and faith, and the Kids of the Pasture have created an entirely different faith, in which the Goddesses impart to them the messages of The Core. Above the world, the Jackals on the railroad tracks watch with a smirk as the Boardwalk Kids scavenge deeper and deeper into the city, under the orders of their tyrannical deputy.
In all this conflict, the encroaching flame is ignored. But, soon, every kid in Seattle will have to fight to protect their homes.
♦ ♦ ♦
Remnants is rated PG-13 for moderate swearing, as well as sexual references and moderate violence.
♦ ♦ ♦
Join Remnants Today, and help put the world back together.
Come join our community discord!