Regeneration: Native to the Tokage is an ability to near-instantly regenerate severed limbs and heal injuries in the midst of combat, in addition to healing these wounds over a longer period when resting. Once per thread Wilkes can restore 100% of his 'HP' in defensive PL.

Energy Resistant (Durability): Wilkes' species has a high natural protection against Ki and energy attacks, providing an extremely durable layer of defense. Once per thread he can lower the PL of an oncoming attack by 33% of its' total power.

Weakpoint (Tail): Until trained away, the tail of Tokages is a very vulnerable spot in which an enemy could easily incapacitate them. This can be removed with a tech slot once Wilkes reaches 30,000 PL or higher. 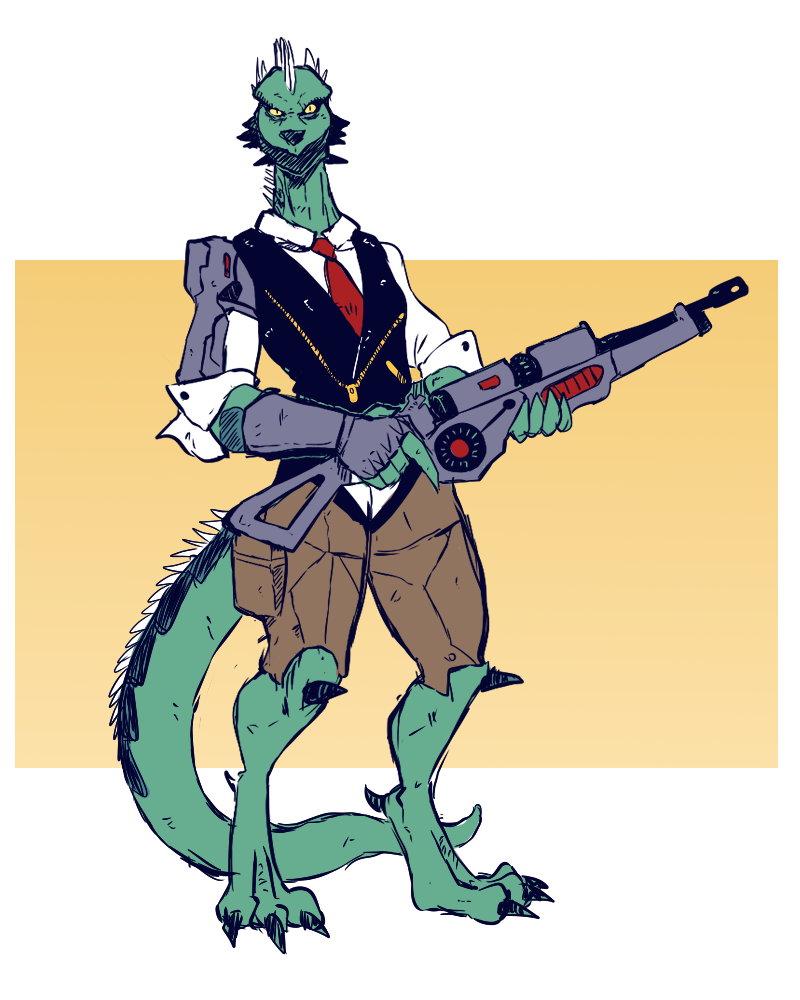 BACKGROUND: Some are born instinctively good with hope and compassion in their hearts. And some... are not. Wilkes, by all means, had everything going for him to lead a normal life. A pair of loving parents, stable finances, and even a group of friends in his youth - so what went wrong? Natural, buried evil, and selfishness happened. Something sparked in Wilkes when he saw those with wealth, a longing that far surpassed jealously and into more dangerous territory. He first committed theft at the young age of eight, slipping his hand into the purse of a teacher when they weren't around. The exuberant thrill and rush of it all only served to fuel his negative intentions, the accumulation of wealth an indicator for just how many times he'd had success. Yet despite this constant need to steal more and more, Wilkes was never caught. When money and items went missing blame could never be pinned upon the Alien boy who cherished the hunt almost as much as he did the act of taking.

He didn't necessarily have ulterior motives either outside of his own personal pleasure. No disdain was held for the people he took from, and oft after a successful stunt, their names and faces faded away into his memory. It was not the people that enticed him but what surrounded them. His feats grew bolder alongside his age, once committing a nighttime burglary on a local storefront and making off with nearly their entire safe of Zeni. The business almost went under due to this, yet Wilkes couldn't find it in himself to care. People were rated based on how they could help him or how much money they could get. Friendship was a foreign concept in place of his boundless greed.

In adulthood, Wilkes took hold of his ill-gotten gains, collected and gathered for over a decade, and moved away from his family to further pursue his passion. In that sense he quickly got involved with organized crime, running jobs for money. Bodyguard detail, intimidation, and rarely even assassination were not off the table for the naturally powerful alien if it meant he would receive payment in the end. As his scores get bigger and bigger, it will eventually become inevitable for the man to run into the big fish of the pond whether he wants to or not.

Spitfire [A1]: Wilkes unleashes a barrage of energy pellets from either his fingertips or his rifle, sending forth a cascade of white-tinted Ki blasts that deal 33% of his PL.

Blast Cannon [UA2]: Charging for a moment, Wilkes unleashes a beam of pure white energy that deals 66% of his PL.

Big Bang Attack [MA3]: Sending forth a small orb of Ki, the projectile rapidly expands through the air before exploding in a violent display of destruction by the enemy for 100% of his PL.

(16k) Rebellion Trigger [SIG]: Improving upon the principles of the T.H. Deathbomb, Wilkes changes the attack into a crackling lance-like beam of pure energy that can bend to track opponents through dodges. The cutting power also allows it to ignore 50% of barriers. It total this deals 66% of his PL.

(24k) Disperse [B1]: With a surge of energy, Wilkes' body pushes back violently against oncoming attacks, repelling them with 33% of his PL and mitigating any damage that slips past that initial amount.

(40k) Negate [SU1]: Focusing, Wilkes counters the entirety of a single oncoming attack at or under 100% of his PL, harmlessly scattering the energy into the atmosphere.

This dweeb is mine. Transfer: worldofdragonball.freeforums.net/thread/112/character-transferal?page=23&scrollTo=53013

a very cash money app. All looks good so you're APPROVED! Your transfer XP will be added shortly.